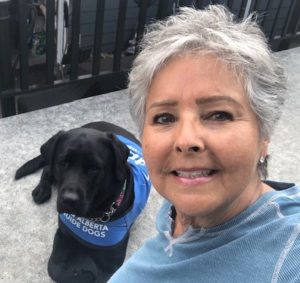 An online trivia game is going to the dogs.

After several of its fundraising events were postponed by COVID-19, BC and Alberta Guide Dogs needed to get creative with ideas for generating revenues online. A Virtual Trivia Night live game on Saturday, April 25 will allow people to maintain physical distancing and still help the charity raise much-needed funds to provide life-changing guide dogs, autism service dogs and PTSD service dogs to those in need.

“Our in-person Trivia Nights in Calgary and Delta are so much fun and are our most attended events in both provinces,” Joni Wright, director of development and communications,” said in a press release. “We want to re-create this positive atmosphere for our supporters online.”

Tickets are $20 each and can be purchased online at www.bcandalbertaguidedogs.com. People are instructed to sign up early to receive game tips and information before the event

The live game link will be sent to participants’ emails an hour before the game starts – there’s no app to download, so participants just click and play. Players from across the country will compete for the 2020 Virtual Trivia Champion title, as well as puppy sponsorship prizes, such as naming a future puppy.

Through BC and Alberta Guide Dogs, Willie, Spoof, Dougie and Rubix are currently living in New Westminster with their puppy raisers.

Longtime New West resident Lynn Radbourne will be among the folks taking part in the fundraiser.

“Willie is the dog living with me and is sponsored by the New Westminster Youth Ambassadors,” said Radbourne, founder of the New Westminster Youth Ambassadors, in an email to the Record. “Dougie is sponsored by the Lions Club and Rubix is in the puppy sponsorship program, and anyone can send a donation directly to sponsor him or any of the others.”

BC & Alberta Guide Dogs is a registered charity that breeds, raises and professionally trains guide dogs for people who are blind or visually-impaired, Autism service dogs for children aged three to 10 with autism, and PTSD service dogs for veterans and first responders. It takes two years and upwards of $35,000 to produce one certified dog, provided free of charge to the recipient.