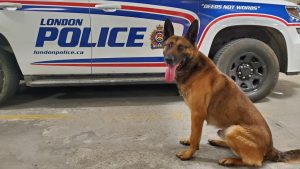 Not all heroes wear capes. Some wear nothing but fur!

Sure, Kylo can’t speak, but if he could he would tell you that he tracked down and found a person in distress with self-inflicted wounds early Friday morning.

Although officers provided life saving measures before transporting the individual to hospital for life saving treatment, it was Kylo who located the person.

According to the LPS, their police dogs, mainly from Germany, Austria, and the Czech Republic, begin their training between 15 and 18 months of age.

Some police dogs are trained specifically for finding firearms, drugs, and or/explosives.