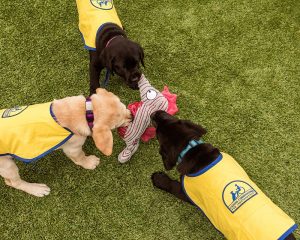 Yonder, 11 weeks old and 15 pounds, had two choices. In a white-walled room at Duke University, the wiggly Labrador mix faced a neon green squeaky squid toy and an upturned bowl topped with a piece of kibble. “OK!” a researcher said perkily, and the puppy didn’t hesitate — she scurried straight toward the treat. Yonder was bred for an exceptionally difficult job: to become a service dog for a human who needs her — by alerting to a doorbell or pulling a wheelchair while remaining composed and quiet, in crowds or on trails, and never chasing squirrels. Whether she’s capable was being gleaned in this room, with tests aimed at measuring her problem-solving, self-control and communications with people.

That was the hope, at least, for Yonder and her six furry cohorts. Early this year, they were the newest subjects of a $1.6 million study, funded by the National Institutes of Health, to help untangle a question long asked by breeders and trainers and now increasingly scrutinized by scientists: What makes a successful service dog — and can it be predicted in a puppy as young as Yonder?

At stake are a lot of money and a lot of dogs. Our expanding understanding of canines’ unique skills has fueled interest in service dogs among people with disabilities and the military, but it has also spawned scammers and years-long wait-lists. Although large organizations have honed the use of breeding and training to produce calm and obedient dogs, only about 50% make the cut. By that time, nearly two years and as much as $50,000 have been spent on one dog.

That is where another booming field — canine science — is coming in. Over two decades, the study of dog minds, genetics and behavior has given rise to laboratories at universities around the world. And in service dog organizations, with their controlled breeding and noble missions, canine researchers see ideal study populations.

“We’re trying to understand the dog side of the leash and how we get more dogs helping more people,” said Brian Hare, an evolutionary anthropologist who is co-director of the Duke Canine Cognition Center, which is studying puppies bred by the California-based Canine Companions for Independence (CCI).

Some discoveries have already been made. Hare and a colleague found that successful service dogs more often make eye contact with a person when facing an unsolvable task and use inferential reasoning to find a hidden reward. Another study concluded that puppies with “helicopter moms” are more likely to fail as guide dogs, while young dogs that quickly solve a multistep problem are more likely to succeed. A neuroscientist who scanned the brains of service dog candidates found that washouts had higher activity in the area associated with excitability.

Other revelations are farther off, but potentially revolutionary. One canine geneticist is collecting thousands of DNA samples in a bid to pinpoint the genetic markers of star service and working dogs.

“It’s huge, huge,” Brenda Kennedy, CCI’s director of canine health and research, said of the impact the research could have on a donor-funded group like hers, which provides dogs at no cost. “It really comes down to numbers. Every time we increase the percentage of dogs that succeed in our program, the more we’re going to be able to have an impact.”

That is why Yonder and her peers — Arthur, Aurora, Westley, Wisdom, Zindel and Zola — were enrolled in a sort of boarding school for future service dogs on the campus of one of the nation’s elite universities. Duke calls it “puppy kindergarten.”

Pups that make it will become one of the five kinds of service dogs CCI provides, which include hearing dogs and assistance dogs for veterans with PTSD. Washouts might be “released” to another organization for a different job, but often they become pets.

In March, the spread of the novel coronavirus forced Duke to close, and Yonder’s cohorts were sent to live in private homes. But the research has continued with puppies being raised off-campus, and Hare said he expects the kindergarten to resume at the university in 2021.

In normal times, this is how it works: A new group of puppies arrives each semester and bunks, for 12 weeks, in the brick biological sciences building home to the Canine Cognition Center or in dorms with students. During the day, all romp together around a linoleum-floored room that amounts to a puppy daycare, with plush dog beds, soft lighting, birch tree decals on a wall and a white noise machine playing forest sounds. Outdoors is an artificial turf play area, where the sight of tussling puppies regularly stops passersby in their tracks.

The puppies are cared for and cuddled by student volunteers, who were, unsurprisingly, eager to help. (About 600 — one-tenth of the undergraduate student body — responded to a call but were winnowed down to 150 after being required to take a five-hour online course about dog cognition and attending a meeting, Hare said.) The pups face 14 cognitive tests every two weeks from the time they are 8 weeks to 20 weeks old, the most rapid period of brain development. At 16 weeks, Hare said, their brains are the equivalent of a 6-year-old child’s.

Hare has been working with CCI for about a decade, since, he said, he was shocked to learn at a conference that behaviorism — the idea that a person or animal’s behavior can be explained or altered by conditioning — was still canon among dog trainers. He and other canine scientists had known since the 1990s that dogs have different individual cognitive abilities.

Sitting in his office down the hall from the puppy daycare in February, Hare described a test his laboratory gives to gauge a dog’s tendency to rely on its memory or a human’s gesture: A person hides a reward under a box as a dog watches. Then the human points to a second box, and the dog makes its choice.

“There is no right answer. And what you find is some dogs really rely on their memory, and they completely ignore you, and other dogs really listen to you. So it’s not one dog is smarter than the other,” Hare said. When testing service dog candidates, he added: “Our challenge now is even more specific, which is, can we figure out which outcome is best for you, given your cognitive profile?”

Hare said he and other scientists have already found, for a study not yet published, that puppies’ performance on some tests at 10 weeks mirrors how they do at 18 weeks. The Duke project aims to get even greater “resolution” on when these skills develop, Hare said, and how early they predict later success.

Innate skills are not everything. To an unknown degree, environment matters, too, and another side of puppy kindergarten is a socialization experiment. Might an increased social environment in these formative weeks provide a sort of “head start,” as Hare puts it?

Before starting training at 18 months, most service dogs are raised in homes by individual or family “puppy raisers.” The Duke puppies are being raised around one another and a stream of humans. Any student can visit the nursery and cavort with puppies, and 4,000 did so last fall. The puppies visit pediatric patients at Duke University Hospital. Medical students perform exams on the pups, as practice for interacting with nonverbal young children.

“When we see him starting to get frustrated, we can just re-engage him,” Margaret Gruen, an assistant professor at North Carolina State University’s College of Veterinary Medicine, said as she held Zindel, a yellow Lab, on an exam table in the Duke cognition lab. Next to Gruen, who is co-directing the research at Duke, medical student Laura Noteware gently felt for Zindel’s lymph nodes.

“Good boy! Good job! Lovely lymph nodes,” Noteware said. Zindel, sitting calmly for the prodding, eagerly gobbled a treat. Service dog providers have long used behavior and temperament tests — to measure fearfulness, say, or aggression — during puppyhood and training. But there has been little large-scale data collection or consistency, researchers say. “There are programs that change their policies with the wind — this year it’s Test A, and this year it’s Test B,” said Evan MacLean, who directs the canine cognition center at the University of Arizona and frequently collaborates with Hare. He said he’s optimistic the wave of research will boost providers’ success rates, but he warned that it will take time. Some providers that breed puppies also use genetics, analyzing pedigrees to estimate the likelihood that a breeding pair will pass along certain traits, such as hip dysplasia or fear of thunder. By collecting this information over three decades, the New York-based Guiding Eyes for the Blind, which provides seeing-eye dogs, has raised its success rate from about 20% of puppies born to nearly 40%, said Jane Russenberger, its senior director for breeding and genetics. (Dogs’ most common reason for failure, she said, is not being able to bounce back into work mode after something alarming occurs.) But each year, about 170 puppies graduate from the program, and about 400 applications for dogs come in, she said. Its wait list is about 150 people long. That is why Guiding Eyes is now working with Elinor Karlsson, a geneticist at the Broad Institute of the Massachusetts Institute of Technology and Harvard. Karlsson studies the genetics of dog behavior, and she sees working dogs — a group that includes service dogs and those that do jobs like drug detection — as key subjects, because they are mostly selected for behavior, not looks. By sequencing working dogs’ DNA, she hopes to discover patterns that correlate with success. She figures she needs samples from 10,000 dogs to make this work; she has about 1,600.

“If you had a predictive test that would be able to tell you whether a dog is likely to be successful, you could do that as a puppy and decide whether you want to invest the resources,” or even test shelter dogs, Karlsson said.

Russenberger’s bar is lower. Her hope is that Karlsson’s work will help Guiding Eyes hone its selection of breeding dogs, leading to higher graduation rates.

“I’m not out to breed couch potatoes, even though they’re lovely pets. It’s really that we want as many guide dogs as possible,” she said. “Just think of the years of savings by being able to serve more people who are blind and visually impaired.”

Back at Duke’s test room in February, Anya, a 7-month-old giant compared with little Yonder, spilled over the black floor mat. The Labrador-golden retriever mix was a member of the puppy kindergarten’s fall cohort. She then lived off-campus with a puppy raiser, but the lab was still following her progress.

Ahead of her was a transparent tube covered in an opaque sheath, open at both ends, with a treat inside. In this warm-up portion of the test, she was figuring out how to get it. Next, research coordinator Kara Moore removed the sheath, and Anya watched as Moore placed a treat inside.

What Anya did next would be a measure of her inhibitory control, known as an “executive function.” Would she ignore her impulse to go straight for the treat, which she could now see, or use the information she already had and detour to the end of the tube?

Hare and others have done this test on many species. Lemurs, Moore said, “just cannot do it at all,” and bump into the tube repeatedly. Detection dogs Hare and MacLean tested did poorly, perhaps because their search tasks require a go-get-it lack of inhibition, Hare surmised. But successful CCI dogs did well.

Anya chose the detour. She was still many months away from starting service dog training, but on this small measure, she performed like a pro.