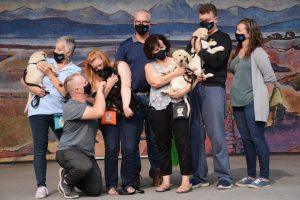 Four puppies embarked on their two-year journey to become service dogs Friday when Dogs with Wings paired them with their new foster families in Grande Prairie.

Teresa Boudreault, a puppy raiser and board member for Dogs with Wings, was among those paired with a puppy during the Puppy Pick Up Parade at the Muskoseepi Park Amphitheatre.

“I think we’re probably more excited than (the puppies) are. It’s a big transition for the puppies,” Boudreault said.

“I’m thrilled that we got four of the litter that are here that can maintain that socialization with their brothers and sisters.”

Dogs with Wings is a non-profit organization that breeds, trains and provides service dogs in Alberta. It also provides autism service dogs as well as facility and companion dogs.

Service dogs can take two years to train and are worth $40,000 each. Boudreault explained how volunteers are provided food and training for their puppies.

“We look after them. We give them basic skills. When we’re not dealing with COVID, we’re socializing them to get them used to being outside and around people.”

Puppies usually stick with their foster families for 12-to-14 months and then go to Edmonton where they will develop their more advanced skills.

Including the four puppies paired on Friday, Dogs with Wings has seven puppies total being raised in Grande Prairie.

The organization also highlighted the impact of two service dogs for the local area.

A facility dog named Archer works at the Caribou Child and Youth Centre, which helps minors who have been abused or exploited.

Roxanne Beeler, a dog handler and a paralegal at the local Crown prosecutor’s office, explained how Archer acted as a “de-stressor” for children who have to talk about something that is disturbing for them.

“He will attend forensic interviews with children if they are giving an interview to the police or to Children’s Services,” Beeler said.

“He’ll sit with them. They can pet him. It just helps them relax a little. As well, he will go to court if the children have to testify in court and he’ll sit on the witness stand with them.”

Beeler noted that the addition of Archer helped bring the Caribou Centre up to date with other child advocacy centres across the province.

“It’s just something that was always lacking in the north,” she said. “We didn’t have one of these dogs, and he still remains the only one north of Edmonton, so he’s in high need.”

Heidi Waye and her husband Kris applied for the service dog when their 10-year-old daughter Naomi was diagnosed with autism at the age of three.

Although on a wait list for five years, Waye said it was “absolutely” worth it.

“The No. 1 purpose of any autism service dog is really about the bolting or the wandering that is common among autistic children,” she said.

Her daughter can also focus on Juna when she is in an environment that may be too overstimulating for her.

“When we’re at a restaurant, she might spend half of that time under the table with the dog, just petting her dog… putting her face into her back and lay there and it’s just a de-stressor,” Wayne said.

“(Juna) was amazing to have at Disneyland. I don’t think we could have done it without Juna because again it gave Naomi somewhere to just sit down and just kind of zone in to her pup.”