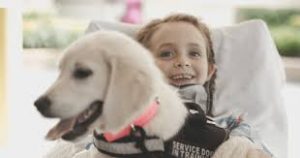 It was love at first sight when golden retriever Juliet, 4 months, and recently paralyzed Memphis Rose Hamman, 6, met for the first time on July 27 outside of St. Mary’s Medical Center in West Palm Beach, Florida.

“Juliet took one look at Memphis Rose in her wheelchair and jumped onto her lap licking her and cuddling,” her mother Gayrene Meade, 30, tells PEOPLE.

“My daughter is a dog lover and wants to be a veterinarian. She was so happy to meet Juliet that she smiled brighter than I have ever seen, especially after learning that the loving puppy was in training to be her service dog. It was a magical moment for me after a horrific few weeks.”

On the evening of June 7, Meade, a single mother, received a devastating call that her daughter Memphis Rose, her mother Tanya Meade, and her uncle Kenneth Graden, had been in a head-on, multi-vehicle crash near Wellington, a city in western Palm Beach County.

Graden, who was sitting in the front passenger seat, died in the hospital the day after the accident. Tanya, who was driving the 2012 Scion carrying the family, shattered her knee, and Memphis Rose, who was sitting directly behind Graden, suffered a punctured lung, a fractured and displaced her neck, and a fractured spine.

“The impact caused my baby daughter to go into cardiac arrest,” says Meade. “She was without breath for 2 1/2 minutes and couldn’t move. Fortunately, there was a doctor on the scene who started CPR until a Trauma Hawk air ambulance took her to St. Mary’s Medical Center. The neurosurgeon said her spinal injury is one she may not recover from, and her chances of paralysis are significant.”

During the first two weeks in the hospital, Memphis Rose was put on on heavy drugs, but as things progressed, she was taken off of much of the medication. She went through spinal surgery and a tracheotomy, and remains on a ventilator. Memphis Rose can’t walk and her recovery is a day-to-day process that could take months or years.

“Memphis Rose has only cried twice,” Meade says. “She has always been stubborn and is determined to walk again. Even though she is a girly girl who loves sparkly things and unicorns, her toughness could help in this journey.”

Memphis Rose was able to connect with golden retriever Juliet through Jupiter resident Lori Griffith, who founded Chasin A Dream Foundation, a local nonprofit that provides assistance to children with life-threatening diseases.

“I was told that Memphis Rose has always wanted a dog so I called my contacts at Furry Friends Rescue Center in Jupiter, and what they said gave me goosebumps, making my heart race with joy,” Griffith tells PEOPLE.

On the day of the accident, Furry Friends, Adoption, Clinic & Ranch had received Juliet, a confident puppy who was personable with people, from Wyoming Sky Goldens in Gillette, Wyoming, a respected breeder that often trains its puppies to be service dogs for veterans.

“We had worked with a talented dog trainer named Summit Earhart who is affiliated with Furry Friends, Adoption, Clinic & Ranch in Florida, and sent Juliet there to train as a service dog for a veteran”  Kourtney Haddix, owner of Wyoming Sky Goldens, tells PEOPLE. “Now, we are so happy to be part of the team that will make Juliet work for Memphis Rose.”

Since their first meeting, Memphis Rose has been able to see Juliet three or four more times. Each time that they have been together their love has grown into what Meade calls a “made for Disney movie” friendship.

Earlier this month, when Memphis Rose was flown to the Shriners Hospitals for Children in Philadelphia for a few weeks of spinal rehabilitation, Juliet accompanied them on the flight.

“It really helped Memphis and me to have her on that plane,” Meade says.

Juliet is now back in Florida training with Earhart which should take at least a year. In mid-September, Memphis Rose and Meade will return to Florida for another week in the hospital, where they will learn what the next round of therapy will be, and what different prescriptions are needed. They will also find a new one-level house with an open plan for Memphis Rose’s wheelchair and a yard for Juliet. Fortunately, Memphis Rose will be able to see Juliet while the dog continues her training with Earhart.

“Memphis Rose will grow with Juliet, they will have sleepovers, then eventually Juliet will be with us all of the time,” says Meade.

Earhart is currently working with Juliet seven days a week to complete a boot-camp-type training regimen in Palm City, north of West Palm Beach. The training is being funded by Leeds Endowment, a local nonprofit that helps disabled people lead healthy, productive, and independent lives.

“Juliet was born to be a service dog for Memphis Rose,” Earhart tells PEOPLE. “But my program is intensive, she has to learn how to act in any public access where an oxygen tank can go. She has to be bomb proof—not get excited by anything, or have outbursts from what she may encounter because Memphis Rose is quadriplegic.”

In her advanced obedience training, Juliet will go off-leash and be able to think for herself. She will be prepared to turn lights on and off, tuck Memphis Rose into bed, sleep with her, and be able to contact her mother if the ventilator beeps, or if there is any other unexpected problem.

“I have had no issues with Juliet,” says Earhart, 26, who has been training dogs since age 12. “She is energetic, excels in socialization, potty training, environmental and obedience. Not scared of much, she is open to exploring. Juliet is not a hesitant dog.”

When Earhart takes Juliet to the grocery store, she sits outside and gets acquainted with wheelchairs, sliding doors, carts, cars, and people. They also swim, walk, run, and do everything they can to expose the dog to new experiences.

“Since we can’t cover everything, we get Juliet used to doing and seeing as many things as possible so whatever happens is okay with her,” says Earhart. “Memphis Rose is happy that Juliet is doing well, and I feel so lucky to help make a difference in this child’s life.”