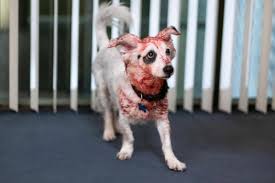 Into the Dark: Good Boy, explores a deadly dog that’s determined to keep its owner stress-free, but there’s more to the creature than meets the eye.

Every month, Into The Dark delivers another holiday-themed horror movie to the streaming service, but the newest entry, Good Boy, is full of twists and surprises.

Into the Dark has turned out to be a great source of content for horror fans. Traditionally, Into the Dark, from Blumhouse Productions and Hulu, releases a new, feature-length movie that centers around that month’s holiday. This approach has led to many surprising and terrifying angles for traditional holidays, but the series’ newest installment tackles new ground, as it revolves around Pet Appreciation Week. Good Boy combines the comfort behind an emotional support animal with the terror that surrounds rabid beasts, which has been explored before in films like Cujo. Good Boy builds a powerful premise as Maggie (Judy Greer) is just as much of a victim to the murderous impulses of her new pet, even if she happens to benefit from them. Tyler MacIntyre directs the smart and scary story that connects due to its impressive cast and the playful atmosphere that the movie creates. Into the Dark: Good Boy features plenty of ridiculous pup-based kills, but there’s a whole lot more to unpack in the picture than just a dangerous dog who’s bite is much worse than his bark. The biggest question that Into the Dark: Good Boy plays around with is just what exactly is going on with Maggie’s emotional support dog, Reuben. Killer animals have been the subject matter of some terrifying movies, but Good Boy lets its monster mostly remain a mystery. There’s an undeniable connection between Maggie and Reuben and the installment has fun with who has really saved who here. Reuben operates like he’s a physical embodiment of Maggie’s anxiety. Whenever she becomes more stressed, Reuben Reuben becomes more intense and even physically grows in size to match Maggie’s pain. In spite of the supernatural elements that surround Reuben, Good Boy never reveals what he is. There are incidents where other dogs all act suspicious of Reuben and later the vet informs Maggie that he has very strange blood work. It’s possible that this is some kind of empath demon that’s actually masquerading in the form of a dog because it’s proven to be an effective way to find a host. Into the Dark: Good Boy gives the impression that Reuben is some kind of ancient evil even though he looks like a young pup. Maggie is shown to be a very frail character in Good Boy and she’s someone that desperately longs for companionship, whether that’s through a romantic partner or a child to build a family with. Maggie’s disastrous dating efforts are part of what push her to get Reuben in the first place, but she seems to find a stable partner in Nate. Maggie’s recent success at work also allows her to re-consider in vitro fertilization and become hopeful again in that respect. Unfortunately, Maggie and Reuben’s increasingly co-dependent relationship causes all of these endeavors to sour. Maggie temporarily abandons Reuben and seems to gain some clarity, but she ultimately chooses her dog over Nate and recognizes that he’s her soul mate. Maggie’s dedication to Reuben tragically results in her being sent to prison, which also effectively ends her fertilization plans. Maggie is now more alone and anxious than ever as she spends the rest of her life in prison. The ending of Into the Dark: Good Boy is rather tongue-in-cheek where it shows a new owner adopting Reuben from the shelter. The scene very much mirrors Maggie’s initial adoption of the dog; it’s meant to imply that this mysterious, evil creature is lodged in a vicious cycle where he uses up his owners until he finds a new one. It’s entirely possible that the dog’s owners before Maggie suffered a similar fate and that the new person who adopts him will have to endure the same. As much as Reuben is meant to be an animal that shoulders burden and makes things easier, he’s in fact more a reflection of the crutch that these animals can be if they’re abused. Maggie begins to turn her entire life over to Reuben and it ultimately costs her her freedom in the end. It’s definitely one of the bleaker endings to come out of an Into the Darkinstallment.