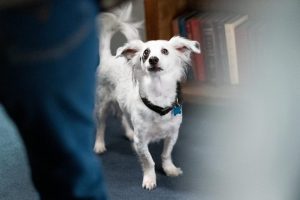 From the sinister minds that brought you The Purge, Happy Death Day and Paranormal Activity, comes the Hulu original horror series Into the Dark, which turns every holiday into a complete nightmare. The horror anthology series features different actors in each episode, with a new episode being released each month focusing on a holiday from that month.

The latest episode of Into the Dark is titled “Good Boy,” and it is the first installment to focus on Pet Appreciation Week. Sure, it’s an odd “holiday” go with, but it works. “Good Boy” follows Maggie, a single middle-aged woman who gets and emotional support dog to help with her anxiety. However, the dog she gets does a whole lot more than help with her anxiety. He eliminates it at the source.

Into the Dark has found a bit of a niche lately, with fun, almost campy types of horror films that are more ridiculous than they are scary. It varies month to month, but more often than not, recent installments have fit that description and “Good Boy” follows suit.

The episode doesn’t take long to introduce the adorable dog as Maggie (Judy Greer) attempts to pull her crumbling life together by adopting a pet. From there, things get progressively weirder as the dog turns out to not be so innocent and adorable. Still, even at its most intense moments, “Good Boy” never really crosses the line of being a true horror. Actually, the early going of “Good Boy” hardly seems like a horror at all. The energy, the characters and even the music are all fun and playful. It seems more like the beginning of a romantic comedy than anything else. And when things do eventually start ramping up, it plays more like an adult version of Goosebumps than anything you would typically see from Blumhouse.

That may seem like I’m being tough on this installment of Into the Dark but I actually see all of that as a positive. No, “Good Boy” isn’t necessarily scary, but it’s clearly not trying to be. Instead, it’s more of a horror-comedy with likeable characters and a very enjoyable energy. It may be cheesy, but it’s delightfully cheesy.

Judy Greer is fantastic and one of the best leads Into the Dark has had. Her performance will keep you guessing about her character right up until the end and her relationship with Reuben, the dog, feels absolutely genuine. The rest of the cast does a great job as well, with McKinley Freeman and Ellen Wong standing out.

There is an element of mystery surrounding Greer’s character as well. One issue Into the Dark has run into in many previous installments has been predictability. A lot of times you can either see the twist coming or there simply isn’t one at all. “Good Boy” might have you thinking you know what’s going on, but it might just surprise you in the end. Overall, “Good Boy” is another fun, wacky and a little bizarre installment of Into the Dark. If you’re looking for something truly scary to enjoy on the next dark and stormy night, this may not get the job done. But if you’re looking for a lighthearted horror-comedy with a fun energy and just the right amount of corniness, “Good Boy” fits the bill.