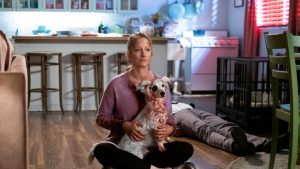 Hulu’s latest entry into their holiday-themed Into the Dark horror movie series might leave you side-eyeing your newly adopted pup. On Thursday, May 28, the trailer dropped for the newest Into the Dark installment, Judy Greer’s new horror comedy Good Boy, which is set to premiere June 12 on Hulu. The movie is tied to Pet Appreciation Week, but it presents a unique take on the owner-pet bond that’s way deadlier than you might expect.

Greer stars as Maggie, a woman who is dealing with an excess of anxiety and stress in her life. In hopes of improving her state of mind, she adopts an adorable terrier to be her emotional support animal, but the little guy takes his job a bit too seriously. As shown in the trailer, her 10 pound dog responds to her stress by killing anyone he perceives to be causing her any pain or emotional distress — and she might actually be OK with that.

In the trailer, Maggie’s friend marvels that her new dog has “made all of your anxiety disappear.” Maggie’s chilling response? “Like magic.” Despite Maggie’s emotional support animal taking the term overprotective to a whole new level, dog lovers shouldn’t worry about Maggie’s pup being the villain of the movie. After all, the tagline reads: “there are no bad dogs, just bad owners.”

ood Boy is especially timely given the coronavirus pandemic, when pets are providing more emotional support than ever before. As shelter in place orders were put in place across much of America, people stepped up to adopt and foster animals in record numbers with the ASPCA seeing the number of animals being fostered increase by nearly 70% this year over last year’s numbers, as reported by CNBC. More and more people seem to be inviting pets into their homes, and new pet owners are still adjusting.

Greer, a dog owner herself, signed on for the role because she knows firsthand what it’s like to adopt a dog. In an April interview with Variety, she shared that she related with Maggie’s “desire to have a companion dog,” and end up with a pet that wasn’t exactly how she imagined. Like her character, Greer also adopted a terrier, Mary, in hopes of having an animal that could travel with her. However, it turned out Mary needed her pet mom more than the actor could have anticipated.

“She’s so awful to everyone that I can’t let anyone take care of her because if she bites anyone they’ll totally sue me, so I can’t really take her with me when I go places and she’s not emotionally supportive,” Greer said of her dog. “In fact, she stresses me out so much because of her nature and how troubled she seems and how f*cked up her life was before I met her. So I feel like I really am her emotional support human.”

It seems Greer knows firsthand that every pet adoption story is different, but even a dog with a complicated past can still bring joy to your life. Good Boy seems to have the same message at its heart — it’s just presenting it in a much more heightened, murdery way.