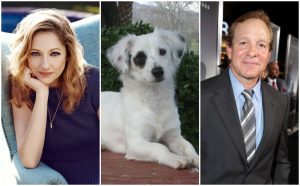 “Good Boy” is the June 2020 installment of Blumhouse Television’s “Into the Dark” horror franchise that streams on Hulu. It will premiere June 12, in celebration of Pet Appreciation Week.

The film centers on Maggie (Greer, who also executive produces), a woman who gets an emotional support dog (Chico) to help quell some of her anxiety. Only, she finds him to be even more effective than she could have imagined because, unbeknownst to her, he kills anyone who adds stress to her life. It was by Aaron and Will Eisenberg, who wrote the role of Maggie specifically for Greer.

“It was so funny, I was walking Mary one day,” Greer said of her own dog on a set visit to “Good Dog,” of which Variety was a part, “and I was walking by Bricks & Scones coffee shop on Larchmont where I guess every writer is — in fact, when I was writing my book I went there. And Aaron and Will ran up to me and were like, ‘Judy, Judy Greer! We’re not weird; we’re writers.’ And at the time they were represented at my same management company. They were like, ‘This is so crazy that you’re walking by because we’re putting together this pitch for this idea for this movie and we’re writing it really for you, and then here you are walking by with this small terrier, and it’s just too crazy and just too good to be true.”

Greer later met with the Eisenbergs for an actual coffee to talk about the project, and she signed on, in part, because of how she related to her character’s desire to have a companion in her dog. Greer rescued Mary in order to have someone she could take with her when she traveled, she said. Similarly, she personally understood the idea of an emotional support dog not being exactly what she imagined.

“She’s so awful to everyone that I can’t let anyone take care of her because if she bites anyone they’ll totally sue me, so I can’t really take her with me when I go places and she’s not emotionally supportive,” Greer said. “In fact, she stresses me out so much because of her nature and how troubled she seems and how f—ed up her life was before I met her. So I feel like I really am her emotional support human.”

In “Good Boy,” Guttenberg is Don, Maggie’s “misanthropic but at times soft around the edges” boss, while Wong is Annie, a former baby-sitting charge of Maggie’s who recently moved to Los Angeles and rekindles their friendship. Neal is Dr. Linda Johnson, Maggie’s fertility doctor; and Alonso is Bea, Maggie’s “no-nonsense” landlord; and Freeman plays Nate, who is a “detective who believes deeply in law and order, which causes his burgeoning relationship with Maggie to tailspin when he is confronted with a gray area in which he realizes she is operating.”

“Into the Dark” is a monthly horror event partnership between Blumhouse and Hulu. Each feature-length installment is inspired by a holiday and features Blumhouse’s signature genre/thriller spin on the story. The most recent installments have been Easter’s “Pooka Lives!”, St. Patrick Day’s “Crawlers,” and the aptly-titled “My Valentine” for Valetine’s Day. “Delivered,” the May 2020 installment centers on Mother’s Day and will stream May 8.