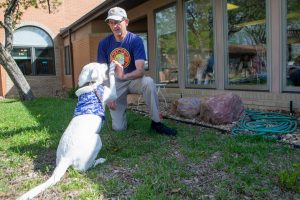 Random acts of kindness are all around. They can be found in the drive-through lane as the car in front of you graciously pays for your meal. They appear when a neighbor mows your lawn.

These good deeds are unexpected and come in big and small packages. They are selfless acts that bring smiles to faces and allow for reflection on the positivity that can be found when negativity is bountiful.

In the midst of COVID-19, it may be more important than ever to focus on random acts of kindness.

Prairieland Visiting Animals volunteer Tim McHenry and his dog Cheyenne are no strangers to handing out good deeds and receiving them.

For several years, McHenry and Cheyenne have partnered to make people happy and offer comfort to those who have fallen on hard times.

“Prairieland Visiting Animals is an organization that sponsors therapy teams all over the city doing the work in places like Midland Hospice, Stormont Vail and Florence Crittenton,” McHenry said.

A typical therapy dog visit would allow McHenry and Cheyenne to enter a facility and have person-to-person contact. The coronavirus has put a stop to that.

Instead, McHenry has found a new way to interact with people, including Presbyterian Manor’s residents.

“I saw this piece online of a lady and her therapy dog holding up signs at a window and I thought, ‘We could do that,’ ” he said.

McHenry and Cheyenne have taken to standing outside windows at Presbyterian Manor and waving at the residents inside.

After waving and saying hello, McHenry starts holding up signs. He uses the signs to tell the residents who he and his dog are, that he hopes they stay safe and to remember to sing and dance.

He then walks Cheyenne out a few feet from the window, instructs her to roll over and high-five.

“What we’ve learned about therapy animals is they help reduce stress in people and provide comfort and support,” McHenry said.

As McHenry offers support to those stuck indoors, his greatest reward through volunteering is his being able to share Cheyenne.

“She has a knack for people,” McHenry said. “Cheyenne just kind of spots people and then just moves in … She’s been that dog since the day I brought her home, so when you have a dog and you want to give them something meaningful to do, you just sort of learn to play to their strengths. Her strength is meeting and interacting with people.”

As McHenry, who was furloughed from his job, and Cheyenne continue to share good deeds, they recently became the recipient of an act of kindness.

“I would post some of our things that (Cheyenne and I) were doing online and all of a sudden, I get this reply from a classmate and she said, ‘Love what you’re doing and we would like to step up and help you during your furlough by connecting you with dog food,’ ” McHenry said. “Two days later, there’s a 40-pound bag of dog food sitting on my patio.”

McHenry said COVID-19 has shown him that tragedy brings out the good in people.

“People are doing things that maybe they hadn’t considered doing before and either because they have the time or they have the resources, they just have the ingenuity,” McHenry said. “They’ve found a way to impact people around them.”

When the coronavirus pandemic comes to an end, McHenry said, he hopes the giving doesn’t end, as well.

“When all this is said and done, are we still going to be those people that continue?” McHenry said. “I think we will. I think we’ve carved a niche for ourselves here.”

Onaga resident Ashley Hain is doing her part to recognize the good deeds happening in her community and beyond.

She recently created a Facebook group called Random Acts for Ross Alton that she started after experiencing heartbreak.

Toward the end of February, Hain was about halfway through her pregnancy and everything was going great.

On Feb. 27, she headed to the doctor to find out the gender of her baby, but the news she would receive wasn’t good.

“That was when we found out there was no heartbeat,” Hain said. “So they sent in a doctor just to confirm everything and the doctor kind of talked to us and explained everything.”

The doctor recommended Hain and her husband, Ross, go to Stormont Vail Hospital to verify there wasn’t a heartbeat.

The next day was a whirlwind for the Hains as Ashley was induced and delivered their baby boy. He was named Ross after his father.

“As I was waiting to deliver, I just kind of thought about I don’t want anyone to ever forget our son, and I know that we won’t, but my husband and I both really love helping people so I know our son would like to do the same,” Hain said.

Hain’s Facebook group created in honor of her son has over 100 members. People are encouraged to post the random acts of kindness they have done.

“I just thought this would be an awesome way to spread some kindness in the crazy world that we live in with or without the coronavirus,” Hain said. “People have been telling me that they are thinking of ways that they can go out of their way to do something nice for someone if it’s big or small. It just makes me feel like (Ross) is going to live on forever through these random acts of kindness.”

Hain said the number of people who join the group doesn’t matter to her as long as she knows there’s people out there helping others.

The Facebook group has also contributed to Hain’s healing process, she said.

“I know people probably do nice things for people all the time,” Hain said. “Especially with this coronavirus, we all need some extra love. But I think people are doing it in honor of our son and that just makes us feel amazing.”

The Topeka Capital-Journal asked its readers earlier this week to share the random acts of kindness they have experienced. The following list is a compilation of those responses and posts from the Random Acts for Ross Alton Facebook group:

My friend and her mother, Misty and Jan Rogers, dropped off a lovely hanging basket which was so nice. I haven’t made it to Jackson’s or Lowes for flowers or anything garden related so to have a basket for my front stoop just made my week — Brianna Berggren

I want to thank the person who paid $5 of my bill at the Dairy Queen at 29th and Arnold on Monday, April 27. I was in the drive thru and when it was my turn to pay, I was informed that the person ahead of me, had paid part of my bill. It was totally unexpected but very much appreciated. Nice people in this world are not recognized often enough — T R Harries

Someone left a full Dairy Queen gift card in a library book I had checked out before TSCPL closed. I just got around to reaching the book and had a nice surprise waiting for me — Rachael Roberts

Neither my dad nor I, since Halloween, can currently get out to the front sidewalk to retrieve our newspaper, but our neighbor to the south has been bringing it in daily — Kendra McEvoy

This week a police officer I have known since school was in line in a store here in town. Before he had a chance to pay for his items, he was called away for an emergency. I felt the urge to grab his items and take care of the bill, and make sure they got home to his wife and children as they were for dinner that night — Bethany Sheffer

Today we headed to a drive-by birthday party. On the way we stopped to get a gift card at Dairy Queen. I paid for the truck in front, a family full, in honor of your sweet baby — Tammy Moore Burgett.