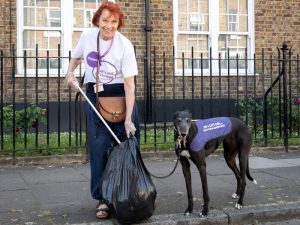 A great grandmother has been using her daily dog walk to clean up her local area while raising money for Guy’s and St Thomas’. 82-year-old Diana Mukuma from Kennington volunteers at St Thomas’ Hospital with her five-year-old greyhound, Dido.

They usually visit staff and patients on the wards as part of the Pets As Therapy programme but had to stop attending at the start of the COVID-19 outbreak.

Diana, who has volunteered at the hospital for eight years, said: “The extraordinary staff at Guy’s and St Thomas’ are pulling together to care for patients so I wanted to give something back to them.

“I’m not into doing press ups or running, nor am I handy at sewing or baking, but I thought we could take on the 30in30 fundraising challenge together, which involves completing 30 miles of activity within 30 days.

“We’ll be picking up a minimum of 30 pieces of rubbish every day for 30 days along Lambeth’s streets and parks come rain or shine.”

Diana, who has 19 grandchildren and five great grandchildren, added: “If you should spy an elderly lady, with bright red hair, walking an elegant greyhound whilst picking up odd bits of rubbish with a grab stick and a black bin bag – that’ll be me and Dido.”

Money raised by the 30in30 Challenge will support the wellbeing of staff at Guy’s and St Thomas’ throughout this crisis. From opening rest and recharge areas for staff to take some time out in a peaceful and relaxing environment, to providing vital training and educational support for those treating patients with the virus.

“We are truly inspired by all of the creative 30in30 virtual challenges that are taking place, along with all the wonderful messages of support for staff, the generous donations and gifts in kind.”