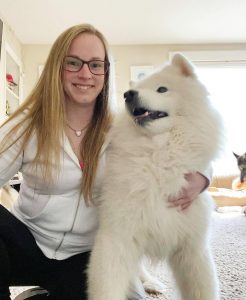 While pet grooming businesses are considered nonessential during the COVID-19 pandemic, the owner of a Buzzards Bay grooming salon says that animals are suffering during the enforced closures.

Marybeth Spencer, the owner of Pampered Paws Pet Salon on MacArthur Boulevard, said that getting a pet groomed goes beyond cosmetics and that not being able to access the service is affecting the health and well-being of her clients.

“Some dogs haven’t had their nails done since March,” she said. “Some dogs have severe skin conditions that need medical shampoos that vets do not provide.”

Additionally, there are service dogs that should receive grooming services regularly, since their owners need them to be able to go out to public places.

Without regular grooming, dog fur can become heavily matted and knotted. Some dogs cannot see well because their fur has grown over their eyes, Ms. Spencer said.

She added that many clients have appointments every four to six weeks to manage their fur and nails.

“We have our hands on dogs more than veterinarians because we see these dogs sometimes every one to four weeks,” she said. “We can point out lumps, bumps, abscesses and problems they’re having with their ears and mouths.”

Groomers are assets to the health of the dogs they service, but it is frustrating is that some grooming businesses are operating under the radar, she said.

While the first reopening phase statewide is expected to start next week, Ms. Spencer said that pet groomers have not been told whether they will be included in the first phase. Since their work involves being in close contact with animals instead of people, she is hoping that she will be able to open her doors again soon.

She said that Massachusetts is the only state in New England that does not list the industry as an essential service, adding that her business can be run safely and with no contact between her staff and pet owners.

“We can retrieve the dog from the car or have them put them inside our door without even walking inside. We can use masks, gloves, and our own leashes that are sanitized after each and every dog,” she said.

Also, the grooming stations at Pampered Paws are more than six feet apart.

If the state gives the industry the green light to open Monday, May 18, the short notice might make it difficult to quickly have her employees ready to go again, Ms. Spencer said.

Beyond that, since many of the dogs have gone months without being groomed, each appointment will likely take longer and cost more than it usually would.

“It is not fair to the dogs or the parents of the pup,” Ms. Spencer said.

Pampered Paws also has a wait list right now of more than 200 dogs.

As a woman under the age of 30 who has built a successful business on Cape Cod, Ms. Spencer said that, while it is upsetting to watch her business struggle, she said she has seen some dogs that had been seriously neglected before the pandemic and she is very concerned about what those dogs are going through now.

“Dogs don’t have a voice like humans, they can’t brush their hair every day, they can’t wash themselves and they can’t do the things to take care of themselves. They only have us!” she said.