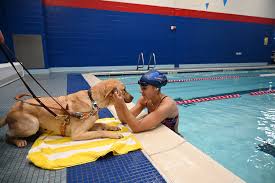 September is National Service Dog Month, but that’s not even the biggest news in Radar’s life.

The Labrador retriever guide dog was recently matched with his owner Anastasia Pagonis, a blind 16-year-old who quickly succeeded at competitive swimming after losing her eyesight two years ago. Two weeks after being introduced, Radar and Pagonis are residing at the Olympic Training Center in Colorado Springs, Colorado, where Pagonis, one of the top athletes on the U.S. Paralympic Swimming Team, is training for a chance to compete in the 2020 Paralympics in Tokyo — now rescheduled to 2021 due to the coronavirus pandemic.

Even though the pair only knew each other for 4 days ahead of the trip from Pagonis’ home in Long Island, New York to Colorado, the swimmer says that Radar handled travel “really well.” Having Radar by her side was a welcomed change for Pagonis, who had to “rely on other people” for almost everything before being paired with the guide dog. “Honestly, I couldn’t be like my own person and so now that I have him, I feel so independent,” the teen tells PEOPLE about how Radar has already rapidly reshaped her life. “I’m gonna conquer the world with him,” she adds.

Pagonis already conquered quite a bit before meeting Radar. At 11, Pagonis, then playing soccer, was starting to lose her vision due to a genetic disease, and while she could see “pretty well at the time” she had a blind spot that caused her to ” get kicked in the face too much with the ball.” Dedicated to keeping athletics as part of her life, Pagonis spoke to her doctor about a different sport she could try that was better suited to her vision loss. Her doctor suggested swimming.

“When I got in the water, I fell in love with it,” Pagonis says of starting the sport. “It was a place where I felt free, where I didn’t need any help getting around, and I didn’t need anything.”

Unfortunately, in 2018, Pagonis’ vision “completely blew” suddenly, leaving her only able to distinguish some variations in light.

“We didn’t understand why this was happening or what was going on,” Pagonis says of the overwhelming moment. “I went back to the doctor and I came back with autoimmune retinopathy, which is another disease on top of my genetic disease. How lucky am I?”

The sudden loss of her vision understandably rattled Pagonis who stopped swimming and went through “a really dark time” as she grappled with what this change meant for her future. With help from her supportive family, Pagonis focused on her mental health and got the help she needed to be ready to start swimming again. “Then, we could not find a coach that wanted to train me because nobody wanted to train the blind girl,” she says of trying to restart swimming. “Nobody had faith in me.”

Until Marc Danin of Islander Aquatics happily agreed to train Pagonis, even blacking out his goggles to get a better understanding of how Pagonis experiences swimming.

This passion, and the support of Coach Danin and her team, has helped Pagonis rise to the position she is in now: training for a potential spot in the Paralympics. Pagonis has also embraced her vision loss and has become an advocate for blind people and everything they can achieve, using her Instagram to show her support and enthusiastically educate others on what living life as a blind person is really like.

Pagonis says it is not uncommon for followers to slide into her DM to question if she is really blind because of her appearance and everything she has achieved, an impressive amount for any 16-year-old. She relishes replying to these doubters, explaining to them how real blind people, like her, rarely match the helpless stereotypes many have in their heads. “I get put in a box all the time. I get put in a box that I can’t do this. I can’t do that,” she says. “I just feel like blindness has such a stereotype where you have to look a certain way, and act a certain way, and you can’t be an elite athlete, and you can’t wear makeup, and you can’t dress up.  You just have to be what they want you to be.” Having Radar by her side only makes her feel more fierce and unstoppable.

“He is literally amazing and he is the smartest dog in the world,” she says of the pooch, who goes with her everywhere, including the pool.  “He’ll just sit on the side of the deck and he’ll just chill there.”

If Pagonis heads to Tokyo in 2021 for the Paralympics, Radar will be there too, and he is uniquely prepared for the crowds, sounds, and chaos that comes with big events.

Radar, a guide dog trained by the Guide Dog Foundation, was raised by the New York Islanders hockey team. While Radar was born at the Guide Dog Foundation’s campus in Long Island, New York, and was later trained by their professionals and matched with Pagonis free of charge, the non-profit relies on volunteers to help raise and socialize their puppies before they return to campus for more advanced training.

The New York Islanders, who had partnered with the Guide Dog Foundation before to raise funds for their efforts, decided to take their support one step further by helping the foundation raise puppies, and Radar was their first. The precious pup attended Islanders games, met fans, pawed around the office, and was regularly immersed in all the sounds and sensations that come with a major sports game. “Essentially a huge portion of what the first few months of guide dog training are is socializing the puppy and introducing them to new things,” says Ann Rina, the senior director of community relations for the Islanders.  “And what better way to do that? We have a captive audience of 15,000 fans in our arena, so why not?”

Radar quickly became a team favorite during his puppy raising period with the Islanders, and Rina says the team, and their fans, are overjoyed to see the dog grown up and already making an impact on his owner’s life. The NHL team was so smitten with being part of the process, the are in the process of raising another service puppy, this time for the Guide Dog Foundation’s sister organization, America’s VetDogs.

“Our organization can make a difference in someone’s life through these animals that create a huge difference in other’s lives,” Rina says of the Islanders’ puppy raising journey.  “We’re talking about creating independence for someone. That’s something we are on board with and will continue to help with.” This continued support from puppy raisers is key to the Guide Dog Foundation’s ability to provide guide dogs to those in need free of charge. According to the foundation’s CEO and president, John Miller, “we always need more puppy raisers”, especially during the pandemic.

If you are interested in showing the world to a future service dog and helping radically change someone’s life, visit the Guide Dog Foundation’s website to learn more about puppy raising and to apply to raise your own Radar.

To keep track of Pagonis’ Paralympics journey, which hopefully ends with a gold medal for her and Radar.