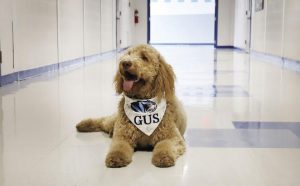 A recent Salem R-80 School Board of Education article mentioned the beginning day of a therapy dog at Salem High School (Aug. 25, 2020, The Salem News). As the staff discussed the upcoming editions of The Salem News, we agreed that more to the story was needed.

While ‘Gus goes to school’ sounds more like a children’s book, complete with many illustrations; Gus is far from a school pet or mascot.

Research is plentiful on the benefits of therapy dogs in various environments, including school-age children.

Both Marty Anderson, Salem High School principal, and Dr. Lynne Reed, superintendent, had experience with therapy dogs in other schools.

“They were so supportive and totally onboard with the idea,” said Fulton.

First-year counselor Chelsie (Tune) Fulton is a 2010 graduate of Salem High School. She attended College of the Ozarks, then later completed her Masters in 2018. She began teaching history at SHS in 2015.

“Once I left Salem and attended college, I didn’t have that kinship that I felt while living here. When we are young, we can’t wait to get out. This place made me, and I want to help others, and make a difference,” she shared.

Fulton has always wanted to be a counselor for students. She is excited to be in the counselor’s seat, after the retirement of Susan Jadwin this past year.

“As a teacher, I had each student for around 46 minutes per day. As a counselor, there is more time to make relationships and assist further with problems,” said Fulton.

Fulton and Gus began training to help students within the first weeks of his life in Salem.

Gus, a Goldendoodle, turned 1 in June. Attending the K-9 Academy in Rolla, Fulton and Gus trained in four classes. Socialization, two courses in obedience, and an AKC-registered good citizen class earned Gus his therapy license, under the Alliance of Therapy Dogs. Susan Hinkle, a long-time therapy dog representative certified Gus. Gus started his work Aug. 31, and will typically be on duty, three days per week.

Fulton provided parts of her research to the board of education at a recent meeting.

Animal Assisted Therapy is a goal-driven intervention, which is directed and delivered by a health, human, or education service professional and is meant to improve physical, social, emotional and/or cognitive function of an individual. Therapy dogs are not the same as “emotional support animals” or “service animals.” Fulton maintains full responsibility for the care and behavior of Gus. If a student is allergic or has a fear of dogs, there are policies in place to support the student in alternate locations.

A typical day for Gus while at the high school includes visiting with students in the counseling office, making trips into classrooms and greeting students in the hallways. Future plans of reading with elementary students, which is proven to raise reading levels; and other trips to R-80 schools will further Gus’ reach and integration into the school system.

“My goal for Gus is to become a part of the school community and for students to engage with him as much as they need or want to. I plan to utilize Gus in a multitude of ways to ensure students have an outlet in whatever emotional state they may be in,” said Fulton.

Fulton said she feels that high school is somewhat inclusive in Salem, but she is not naïve, knowing that there are bullies, and bullying happens differently now. Social media has made it easier for bullying to be a silent problem, leading students to not seek support as much.

“Bullying isn’t black and white, as it may have previously been with shoving in the hallway, and other noticeable issues,” said Fulton.

She sees students multiple times per week for a variety of issues related to scheduling, emotional issues, internal struggles, among other problems.

Students have siblings, or other family members, close friends in the school, so they are interconnected. If one is suffering an emotional problem, chances are there are others suffering too.

Her hope is to help ease the distress for students whenever possible, with Gus by her side.