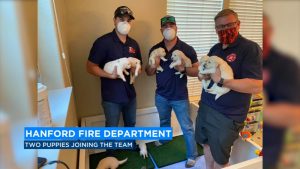 A pair of golden retrievers are the newest recruits at Hanford Fire Department. The two dogs are being trained as a hybrid of facility and therapy dogs for the department. Their names are Asher and Tiller.

“So, the ‘Tillerman’ is known as the guy on the back of the ladder truck, ladder trucks actually drive the back of it, so that’s kind of how that name was picked out and then as for Asher, you know obviously ash that makes a lot of sense, but also there’s kind of meaning behind it like blessed and happiness,” said Hanford City firefighter Matthew Martinez, who is also Asher’s handler.

“Let’s just be honest and I think first responders are having a rougher year than a lot of people because of everything that they’re having to deal with and we just jumped on the chance, when they approached us, we were all over it,” said Corso.

Hanford City firefighter and Tiller’s handler, Connor Kurtz, spearheaded the idea of getting pups for the department two years ago after coming back from a twelve-hour shift.

“So, it’s kind of nice to come back to the station and the plan is these guys are gonna kind of help us kind of cope with the call you know maybe just help get our mind off of it and kind of help relax, reduce stress and anxiety,” said Kurtz.

The pups have been with Martinez and Kurtz since Friday and are still learning as they’re only about 9 weeks old.  They’ll face the special challenges posed by COVID-19 along with the crews.

“With COVID and all the protests going on, hopefully this will lighten the whole world up and kind of just get their mind off that and so far especially at home it’s helped me out.”

The Hanford Fire Department and the California Service Dog Academy hope this will be an ongoing program to help first responders and the community.