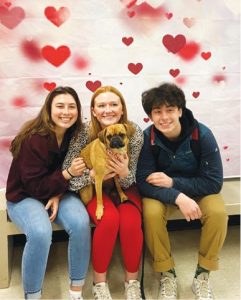 Did you see the dog at school?

Make-A-Wish is a foundation dedicated to raising money to fulfill the wishes of children diagnosed with a critical illness. Wish recipients must be older than two-and-a-half and younger than 18.

According to Dickinson, “Hank the Tank” draws the attention of students passing by in the hallway.

Katherine Riley purchased dog treats and expanded on her thoughts on the cause: “I think it’s a great fundraiser and I love the idea that the business class is actually doing something practical and seeing the reality of trying to get a product from the idea all the way through,” she said. Riley also has a therapy dog of her own and thinks, “Having dogs at school adds to the climate. Especially in times of higher stress.”

“I feel like my stress levels are so much lower when Hank is here,” Dickinson said.

Dickinson explains that the business students have sold small and large stickers, from 50 cents to $1, and a bag of four homemade dog treats for $3 each.

Students were also able to take photos with Hank for $2 and enter into a raffle for $1, Dickinson explained.

The students made the stickers off of a website and printed a picture of Hank on them. The dog treats were homemade by the students and bagged with a photo of Hank on the cover. To donate to the cause, individuals could purchase a photo of themselves with Hank or, one of the other products listed above.

“Hank loves being in school,” Dickinson said. The students love his presence, too.

Eliza Mclean, who took and bought a photo of her with Hank, says “I love dogs, and the photo was worth donating to the cause.”

Peter Booth, a math teacher at CVU, agrees with Mclean, adding that he takes pride in putting his photo on display on his water bottle.

Dickinson conveyed some challenges through the project.

“The biggest challenge was making everyone in the class feel like they have a part,” she said.

Jack Mahar, a sophmore, said, “my biggest takeaway is that big events can be planned very quickly if there’s the right group of people.”

Dickinson hopes to raise $10,000 to fulfill a kid’s wish before she retires.