Having An ESA In College 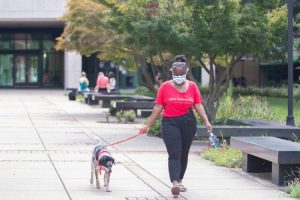 If a student at WKU has to go into quarantine or isolation because of COVID-19, emotional support animals will not be allowed to stay with their owners.

According to Bob Skipper, WKU director of media relations, ESAs have an emergency contact with whom the pet will stay with if their owner gets sick.

Jalissa Novotney, a senior anthropology major from Chicago, has an ESA and said that the idea of having to be without it for two weeks is a little frightening.

“If I get sick, my aunt in Tennessee will come get Hazel and take care of her until I’m able to come get pick her up,” Novotney said. Novotney came to campus in 2017 and dealt with homesickness and depression.

“I saw all these animals on campus and was like mom, maybe I should do this with my anxiety and depression,” Novotney said.

Novotney said she spoke with her physician who wrote a letter and coordinated with the Student Accessibility Resource Office in DSU who approved her request for an ESA in around two weeks.

Novotney found her ESA when volunteering at the animal shelter for one of her organizations.  “When I first saw Hazel Grace, I immediately fell in love with her,” Novotney said. “Her background is also sad. Her previous owner just didn’t want her. She was very scared and timid and wouldn’t come near me. It was a lot about building trust, and I think me also trusting her.” According to Novotney, who’s also a resident assistant, ESA’s are supposed to be in the dorms at all times, unless they’re on a walk or at the dog park.

While she’s a little frightened at the idea of not having Hazel for two weeks, she also says she understands the possibility that she can’t take care of her in quarantine and thinks she would be better off with her aunt in Tennessee for that time.

This is consistent with WKU’s policy regarding sick residents and emotional support animals.