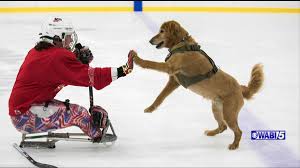 Every storybook needs a hero. Sometimes even the hero, needs a hero. Maine’s own Christy Gardner is a hero in every sense of the word. We share part one of our two part series on her mission…

Christy Gardner played high school and college sports, in Maine, before serving in the U.S. Army.

“I was overseas peacekeeping, I was injured in the line of duty,” says USA Paralympian Christy Garnder, “I ended up having to skull fractures, spinal chord injury, some other fractures, I lost two fingers, and then both legs.”

Gardner battled for years in recovery.

“About a year and a half on active duty rehabbing,” says Gardiner, “Then when I came home, another 3 1/2 years with physical therapy, and occupational therapy, and speech therapy through the V.A.” A recovery aided by a dog.

“Moxie is my savior,” Gardner says, “she is my service dog.”

Who reminded Christy that even heroes need a hero sometimes.

“Another Veteran I met kept inviting me to adaptive sports events,” says Gardner

Despite being told she wouldn’t play sports again, Christy found a way to compete.

“I started doing the winter and summer sports clinics that the V.A. puts on,” say Gardner, “The V.A. winter sports clinic it’s skiing and snowboarding all day. Then at night, they introduce a new sport like kayaking in the hotel pool, wheelchair basketball, and then sled hockey.

She’s now been on the USA Women’s Sled Hockey team for 8 years.

“As far as you can go, as a female in the sport,” says Gardner, “It takes so many different muscles, and so much athleticism. It’s so competitive because it’s full checking in high speed. It’s just an amazing sport.”

It helped her find clarity in her mission.

“I went back to the University of Southern Maine and graduated with a degree in recreation therapy,” Gardner says.

A clear mission. Help people, and if there is no way to help, find one.

“I interned at the V.A.,” says Gardner, “I said ‘I wonder if they give us ice time to let the veterans come to public skating.’ We started a sled hockey program for disabled veterans here. We are the New England Warriors. We’ve been in the local hockey league for I think five years and we’ve won the league twice. It’s so much fun to be a part of a team and to excel at some thing at a competitive level.”

Gardner has found another way to be a hero for heroes. She trains service and therapy dogs to make a difference like she felt.

“Teach them all the basics. Sit, stay, lay down, be housebroken, those sort of things,” Gardner says, “And just socialize them and desensitize them to different environments. I started doing that and then I really got into more of the training.”

Which is where we find our protagonist…..

We’ll introduce you to Lucky, who now has a book about him, and see how he is helping Christy with her mission in part two Tuesday night.