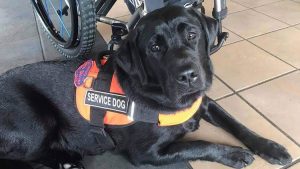 Dolly, a service dog from Naples, acts as a cardiac alert for her owner Amy Sherwood.

Dolly, a service dog from Naples, has made the semi-finals for Hallmark Channel’s Hero Dog Award.

Dolly works as a cardiac alert for her owner Amy Sherwood, who is restricted to a wheelchair because of multiple illnesses. The black lab alerts Amy if her blood pressure drops too low or her heart rate rises to an unsafe level.

Dolly is trained to press a certain button that calls 911 if Sherwood were to pass out at home. If they are out in public, she knows how to go alert someone for help. Dolly has had to use her skills multiple times.

While this is Dolly’s most important job, the 4-year-old black lab has other talents. She opens doors, pulls packages into the house, helps to do the laundry, pulls Amy’s wheelchair, will pay for items in stores, and even works as crowd control in case people are getting to close and make her owner uncomfortable.

According to Amy, “Dolly is my friend, my partner, and my medical equipment with a loving beating heart. She has changed my life completely. I don’t know what I would do without her.”

Sherwood says she was quite insecure and afraid to be “a functioning part of society.” Dolly inspired her to write two children’s books, Pawsibly the Best Medicine and Emotional Support is Ruff.

Amy trained Dolly herself by taking her to casinos and arcades to teach her how to press buttons and took her out in many public places to acclimate her to crowds and distractions. But it’s not all work and no play for Dolly, the black lab spends her time off the leash dock diving. She has competed twice in the DockDogs World Championships. While dock diving is a favorite pastime, Dolly loves any activity involving water.