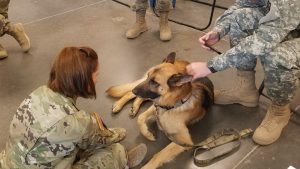 Joseph Hall and his dog Chance make up a therapy dog team and belong to Caring Canines, a part of the San Luis Obispo Dog Obedience Group (SLODOGs).

Chance has been nominated and is a candidate for the American Humane Hero Dog Award, which is set to be presented later this year.

From places like nursing homes, Grizzly Youth Academy, to Camp Roberts, Chance has made about 50 visits as a therapy dog and has even helped soldiers suffering from PTSD.

The American Humane Hero Dog Awards is an annual, nationwide competition. Seven finalists will be honored at a star-studded awards gala which will be broadcast nationwide on the Hallmark Channel.