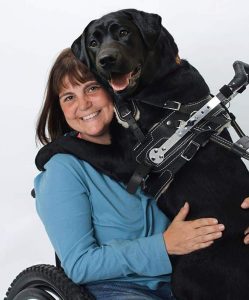 Dolly Pawton, a 4-year-old black Labrador Retriever, has been Amy Sherwood’s constant companion ever since Sherwood helped deliver Dolly in her own home. Dolly is also a trained service animal who helps monitor Sherwood’s cardiac health and assists Sherwood in her daily tasks.

If Dolly wins in the next round of online voting in her category, she and Sherwood will go to Los Angeles to compete in the final round, which will be featured on the Hero Dog Awards Broadcast on the Hallmark Channel in October.

Sherwood has postural orthostatic tachycardia syndrome, congestive heart failure and adrenal insufficiency and uses a wheelchair. Dolly is able to alert her if her heart rate gets too high or her blood pressure falls too low, in addition to helping Sherwood with her laundry, paying for items at stores or other ways to “help maintain the normalcy in life,” Sherwood said.

If Sherwood’s heart rate gets too high or her blood pressure drops too low, Dolly will come up to Sherwood and paw at her leg until she pays attention to her. But sometimes Dolly is too good at her job.

“I started playing in a pool league and my heart rate (becomes) escalated. I’ve tried to get her to not alert me and she’s like, no, you don’t feel good, so she’ll break free from my wheelchair and she’ll go get someone.”

Sherwood trained Dolly herself after picking up tips from former trainers and watching and comparing YouTube videos. When your heart rate goes up or your blood pressure goes down, Sherwood said, you give off a different smell that dogs can detect. In order to train Dolly to recognize the difference, Sherwood would put a cotton ball in her mouth when her heart rate was up and then when it was normal and keep each in a bag. She would present each of them to Dolly at different times and give her a treat when she reacted to the high heart rate cotton ball, and ignore her if she reacted to the normal heart rate cotton ball.

Sherwood also took Dolly to casinos and arcades to teach her how to use buttons and be comfortable in a crowd.

“I don’t even think she’s a dog. She does so many things that humans do. She likes fireworks. I trained her to like things that move and loud noises. When we go to the fair she actually likes going on the rides. Just because one service dog doesn’t like something, doesn’t mean another can’t,” Sherwood said.

Dolly has also given Sherwood more confidence and comfort especially, she said, as a survivor of domestic violence.

“Having people stare at me (in public) I felt different with a dog by my side because I felt like they were staring at the dog and not at me … It helped with the anxiety and the PTSD (post-traumatic stress disorder) with having people around me when I wasn’t comfortable.”

Sherwood is proud of Dolly.

At the end of the day, Sherwood said, the contest isn’t about the award, but “about teaching people about service dogs and what they can do.”

Anyone aged 18 and up who lives in the United States can vote for Dolly at herodogawards.org/dog/dolly-pawton. Voting ends July 16.

“The American Humane Hero Dog Awards are our way of honoring the best of our best friends,” noted Dr. Robin Ganzert, American Humane president and CEO. “This unique effort brings attention to the life-changing, life-saving power of the human-animal bond.”