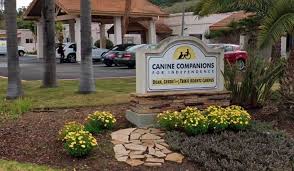 Raider, a 4-year-old English Labrador who works with the Corona Police Department, has advanced to the semifinals of the 2020 American Humane Hero Dog Awards.

Raider is one of three dogs in the nation to vie for the title of the nation’s top therapy dog of the year and compete with six other dogs for the top title of American Hero Dog at the annual American Humane Hero Dog Awards event, according to a news release.

Raider, a trained facility dog from Canine Companions for Independence in Oceanside, is the Corona Police Department’s first facility dog and his primary focus is to assist those impacted by traumatic events and crime, according to the news release.

During his time with the Corona Police Department, Raider has been involved in more than 350 public events and more than 100 trauma victim assists, and has had direct interactions with approximately 45,000 people.

His partnership with the Riverside County district attorney’s office has also led to the victim advocates office obtaining a grant for two courtroom dogs.

Raider gained recognition in 2018 with his assistance to the Turpin children, whose parents pleaded guilty to counts including torture and false imprisonment, and he worked almost two years with those children.

Raider is also a regional resource as a member of the Riverside County Crisis Response Team and he was deployed to the Borderline Grill shooting in 2018 and the Saugus High School shooting in 2019, according to the news release.

Raider is one of 21 dogs in seven categories chosen by the American public to advance to the semifinals from a field of 408.