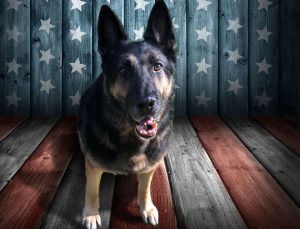 Meet Rek, a nine-year-old German Shepherd and former military working dog who is now living the retired life in Sarasota.

Rek is one of 21 semifinalists in the Hero Dog Awards, a competition hosted by the American Humane organization, where military, therapy and rescue dogs are honored for their service. Out of thousands of entries and votes received, Rek has now advanced and has a chance to win the title of “American Hero Dog.”

Founded in 1877, American Humane is the first humane organization in the country, protecting the rights and well-being of animals. This is the 10th annual Hero Dog Awards, where the public has cast votes for dogs in seven different categories, including Military, Therapy, Law Enforcement and more. Nearly half a million votes have been cast so far this year.

Beyond his adorable looks, Rek’s story of heroism and loyalty that have touched the hearts of voters. Rek was deployed as an explosive detection dog in Iraq and Afghanistan from 2011 to 2016, where he lived consecutively for five years. His current owner, Laura Cole, met Rek while deployed at a NATO base, and they formed a strong bond.

“I would feed him and bring him toys whenever I could,” says Cole. “I loved watching him work.”

Rek would sniff vehicles for drugs and explosive weapons before soldiers performed in-depth searches. His “rest days” were few and far between, yet he still enjoyed his toys as rewards and the love from his handlers, when he could.

“He still doesn’t know how to play like a normal dog,” says Cole. “But he has fun trying to play fetch, and enjoying the sunshine.”

Cole and Rek were separated from April to June of 2016, when Rek had retired and Cole was still deployed overseas. A generous U.S. nonprofit called K9 Hero Haven cared for Rek until the pair could reunite. Once Cole retired, she adopted Rek and they moved to Florida.

In 2018, Cole heard about the Hero Dog Awards through Facebook. “I know he’s my hero, so I thought why not enter him?” she recalls. Rek advanced to the semifinals last year, but never made it this far.

Cole and Rek plan to attend the Hero Dog Awards Gala in California if he advances again. The ceremony is broadcast nationwide on the Hallmark Channel.

“I just want to share his story,” says Cole. “It is not easy for these dogs when they return to the United States. It takes time to recover, and time to understand play and love.”

American Humane president and CEO Dr. Robin Ganzert says the awards are “the best way to bring attention to the life-changing, life-saving power of the human animal bond.”

In other words, they’re a way to honor our best friends.