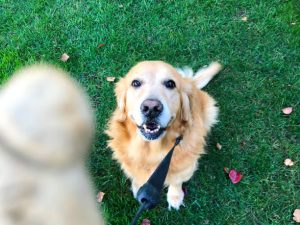 The 2020 Stanley Cup Qualifiers will begin this Saturday, August 1, and the hockey dogs of Twitter and Instagram are PUMPED.

The 2019-20 NHL season finally concludes with the expanded Stanley Cup Playoffs, with 24 teams involved and the top four teams in each conference playing among each other for seeding purposes in the second (first) round.

In the Eastern Conference seeding games at Scotiabank Arena in Toronto, Ontario, the Boston Bruins, Ovie the Bulldog’s Washington Capitals, Philadelphia Flyers and Holland the Pup’s Tampa Bay Lightning will be duking it out.

The teams left for their respective bubbles on Sunday night, and many fans enjoyed seeing their teams off.

Among them in spirit (they didn’t actually attend the parking-lot set expedition, we don’t think) were Bark-Andre Furry and Deke-Henri Furry.

We didn’t know that Bark played the ukulele, but as he is a very talented and articulate therapy dog, we aren’t really surprised, either. Music is always a good way to pass the time, and even if you aren’t really musically inclined, ukulele is an easy instrument to learn (so is mandolin).

Alex Pawtrangelo is more than ready for her St Louis Blues to defend the Cup! “Raise your paw if you’re ready for hockey!” she said. The Nashville Predators team dog Smash is ruling over the ceremonial car (decorated in Arizona Coyotes colors) that will be pounded with a sledgehammer. It’s an oddly-specific Preds playoff tradition (the country stars doing the National Anthem makes much more sense), but we bet that Coyotes’ team service dog Luna isn’t thrilled that her team’s car will be clobbered.