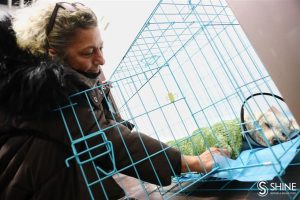 A stray dog and cat were neutered for free at an animal rescue center in the Pudong New Area, as the neutering reservation service for the public issued on WeChat account “ala_chong” was launched yesterday.

The male dog was recently taken in by a Shanghai Public Security Bureau dog shelter, and was quarantined for seven days for medical observation, said Zha Zhenliang, director of a local rescue and adoption center for small creatures. The male cat was taken in by a resident.

The center is in charge of neutering procedures, established last month by the Shanghai Spiritual Civilization Construction Committee Office, the Shanghai Public Security Bureau’s social order department and the Shanghai Agriculture and Rural Affairs Commission. The center encourages people to keep pets in a civilized way and rescue stray animals.

After the quick surgery, they both recovered well. The cat was adopted by the people who rescued it, and the dog was taken in by Shanghai Animal Rescue, a private organization comprised of expats and returnees from overseas, who will help find him a home.

Ekaterini Alexiadou, a German founder of the organization, has lived in the city for six years and is a manager for a German company. She is also the center’s first foreign volunteer, and has helped with the adoptions of more than 800 stray dogs over the past four years.

All veterinarians are volunteers with certificates and more than two years of experience. Volunteers from companies, including pet food provider Royal Canin, Shanghai Disney and online game developer Boke, will work in the rescue center taking reservations.