Homeless Veteran And His Dog 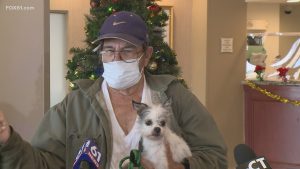 On Tuesday, Vietnam veteran Robert Chapin, of Texas, turned 76. However, he had no time to celebrate. He had no money and was about to be kicked out of an East Haven hotel. But that’s when his best birthday present ever was delivered. It was the gift of caring.

The La Quinta Inn and Suites, in New Haven, in partnership with Columbus House, provide services to homeless veterans, including temporary housing. And among the more than a dozen veterans staying in the La Quinta now is Chapin, who came to Connecticut thinking he had found love. Instead, he was left with almost nothing. “I came up here to meet a gal that I met online and when I got up here, she decided she didn’t want to meet me,” Chapin said in the lobby of the La Quinta.

The woman was, however, happy to accept plenty of gift cards he provided to her, which helped drain his bank account.

“I gave her the last $40 I owned for her mother’s medicine, supposedly,” he said.

When Chapin arrived from Texas, he stayed at the Quality Inn in East Haven and was forced to sell his truck to help pay that hotel bill. But he was still short money. So, the woman he came to see told him he could use one of her credit cards.

“What happened with that credit card was our bank rejected it and it came back as declined,” said Nishal Desai, General Manager of the East Haven Quality Inn.

The next morning, the Quality Inn told Chapin without another form of payment he would have to leave.

“And then he got a little upset and he said, ‘well I’ve got nobody,'” Desai said.

The Quality Inn then called East Haven Police to supervise the departure of Chapin and his therapy dog Lou-Lou.

“We relayed to the Quality Inn that we were making efforts to try to find some type of services for Mr. Chapin,” said Sgt. Joe Mulhern of the East Haven Police Department.

The Quality Inn agreed to house him for one more night. And because he hadn’t eaten in days, the Chili’s next door provided several free meals. Then, East Haven Officer John Trinh, who made dozens of calls, finally connected Chapin with Columbus House.

“His is one of the more meaningful things I’ve been able to accomplish here (with East Haven Police),” said Trinh. “It’s what we signed up for to help people and I’m just really glad that there were services that were available for Mr. Chapin right away.”

The Columbus House veterans services program provides housing and support for homeless male veterans. They placed him and Lou-Lou, at the La Quinta until permanent housing can be found. That can take up to three months.

“I have a soft spot for veterans,” said Aimee DeMusis, of Columbus House. “My dad‘s a Vietnam veteran too. So, it’s very rewarding all of our staff would probably tell you the same thing.”

“We all have ups and downs in our life,” Chapin said. “It’s what we make of those up and ups and downs that makes the difference.”

“I would appreciate it because I don’t have a dime to my name,” Chapin said. “I mean this is the first time I’ve ever been homeless in my life.”