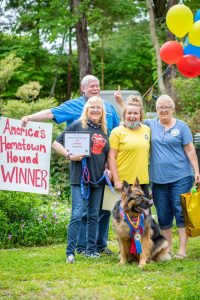 The suspense was killing us.

Wallace, the French bulldog, claimed second place with 6,200 votes, and Tilly, an adorable handicapped dog, came in third with 4,500 votes.

All three dogs hail from Plymouth homes, but the competition was region wide.

Since its March launch, The America’s Hometown Hound competition drew 236 submissions and about 65,000 votes.

The competition stretched from March into June, with fans voting for their favorites day after day, week after week. When the final 25 were announced, participants were encouraged to vote their favorite every day. They did.

When a dog received 500 votes, that seemed surprising. But then thousands of votes were rolling in, making this one popular idea, care of Pam Ranheim, owner of Just Around the Corner Dog Walking and Cat Sitting in Plymouth. Ranheim came up with the notion of a dog ambassador, elected annually to represent the town, with the winner announced at the Plymouth Area Chamber of Commerce’s hugely popular Bark in the Park event.

She launched America’s Hometown Hound, which became a welcome distraction from 2020 news that has disheartened so many.

The Bark in the Park event was rescheduled for June in light of the pandemic, and then that date was canceled.

It’s unclear when and if it would be rescheduled again, so on June 6 Just Around the Corner PR staffer Sarah Jane Tollman could be seen on the America’s Hometown Hound Facebook page announcing the winner.

Charlie Brown’s parents, Susan and Steve Brown, will receive a free photo shoot of their dog with photographer Kelli Wagner, free flea and tick treatments from Burgess Pest Management, and dog training by Ken Brady of To the Rescue Canine Training of Plymouth.

Second and third place winners receive gift cards to Pappa’s Pet Store in Manomet, Dog Spot Designs bandanas, treats and some toys as well as certificates for free services at Just Around the Corner.

Charlie Brown will be the face of Bark in the Park until next year, when another competition reveals a new winner. He will be included in the Thanksgiving Day Parade, even if it’s virtual this year, and will serve other functions as Plymouth’s 2020 dog ambassador.

Here is his write-up:

“My specialty is social non-distancing – as a youngster I went to the Plimoth Plantation Farmer’s Market to greet children, merchants, other dogs, and even sheep. I was so regular that they called me the unofficial Market Mascot. I passed my AKC Canine Good Citizen’s Test in the middle of the 2017 Walk to End Alzheimer’s at Pilgrim Memorial State Park. And then, thanks to the wonderful DOG B.O.N.E.S. program, I became a registered therapy dog. Now I visit hospitals, nursing homes, and schools like Plymouth South Middle School. I have a regular weekly gig at BID-Plymouth Hospital and Spaulding Rehab Hospital. I love swapping kisses for treats with patients and staff as I make the rounds thru the Lab, Radiation Oncology, ER, Senior Behavioral Center and two recovery units. Unfortunately, I’ve been temporarily laid-off from both jobs – I miss sharing the good feelings and hope to be back soon. I also love going into Town Hall for dog-tags and beach permits, the local Fire Station for Open House and Photo-with-Santa events, and of course greeting the DPW Crews and Police Detail Officers on our well-maintained street projects. Late afternoons you can find me at Hedges Pond Recreation Area or the Elmer Raymond Park where I’m considered an excellent tennis ball retriever. Each night ends with a tasty soup bone from Piantedosi’s Court Street Butcher Shop. It’s good to be Charlie Brown.”