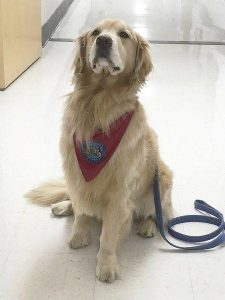 “Duncan crossed the Rainbow Bridge peacefully last week, with his most faithful friend, Jake, and other close friends by his side,” the organization said in a May 18 Facebook post.

Duncan was a regular at Fox facilities for several years, alongside his owner, Duane “Jake” Jacobs, a retired teacher from Gilbertsville, according to Gabrielle Argo, Fox’s regional marketing, public relations and community engagement manager.

“Duncan was a beloved member of the Fox family,” Argo said. “Everybody would have treats waiting for him in their desks for his Wednesday visits.”

Duncan had been ill for a while, Argo said, but outlived his vet’s expectations and continued his rounds right up until the facility closed to visitors in March amid the coronavirus outbreak.

A card-carrying therapy dog since 2013, Duncan was certified by Therapy Dog International. He graduated from a two-month training program at Hinman Hollow Kennels in Hartwick, under the instruction of Teresa Powers.

“There was just something about Duncan,” Argo said. “He was an angel long before he got his wings.”

“He made me feel less nervous when my name was called to start my ‘cancer journey,’” she said.

The night before Vredenburgh started chemotherapy, she said she had a dream that a therapy dog would be in the session with her.

“I remember telling my mom about it, thinking it wouldn’t really happen, but it would be really awesome if it did,” she said. “That day, my mom, husband and I were waiting in the waiting room to be called back to meet my oncologist for my first treatment when Duncan walked in and came right over to me, out of everyone in the room.”

Vredenburgh said she asked Jacobs if she could pet Duncan “and of course he said yes.”

“It was like an instant sign of relief because I knew I’d be OK,” she said. “I knew he was there for me and to comfort me. Duncan being there was a great help for me that first day, as I am sure he is a great helper for those in the community as well.”

East Worcester resident Christopher Jones said he only met Duncan once, during a March 2016 stay at A.O. Fox Hospital for an intestinal blockage, but the dog left a lasting impression.

“My wife and I still talk about Duncan,” he said. “Now she wants to get a golden retriever.”

Jones said he underwent a painful procedure to have a tube inserted through his nose and into his stomach, which the doctors told him was one of the worst procedures to experience while awake.

“When Duncan came to the door, I went from being 42 years old to 5 years old,” Jones said. “He brought my anxiety down and for a little while, I felt normal in an awful situation.”

“He was just the sweetest dog, and definitely the best part of my experience,” Jones continued. “You don’t realize how much that means to you until you’re in that situation. He was extraordinary.”

Jacobs told The Daily Star in 2017 that he would not continue his hospital visits after the eventual passing of his partner.

“There will never be another dog like Duncan,” he said.