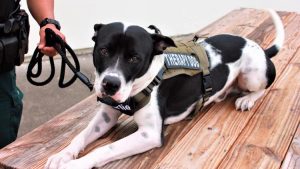 After his rescue, Charlie entered the Brevard County Paws and Stripes program.

Paws and Stripes takes in dogs from shelters. Inmates then train the dogs to do much more than just play fetch and rollover. The dogs are trained to become PTSD dogs, therapy dogs, or child-victim advocate dogs, according to the Pasco County Sheriff’s Office website.

Leos couldn’t wait to get started with Charlie after finding out he came from the Paws and Stripes Program.

The two play an important role in bridging the gap between law enforcement and those who need mental health assistance.

“We kept seeing the enormous amount of calls for mental health and substance abuse that are in our community,” said Sheriff Chris Nocco with the Pasco County Sheriff’s Office. “But we’re seeing that societally, those numbers keep growing.”