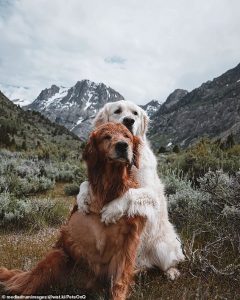 The incredible bond between a pair of retrievers has been documented in a series of adorable photos. 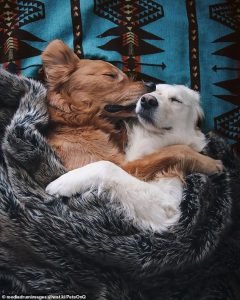 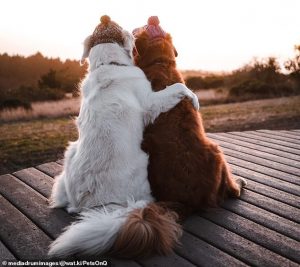 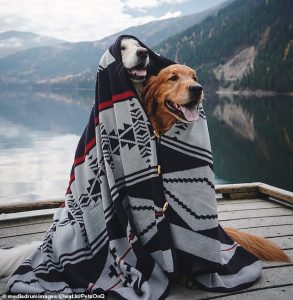 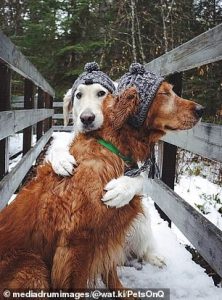 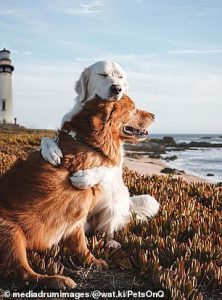 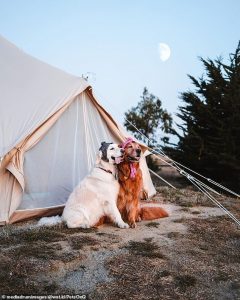 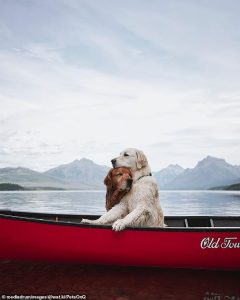 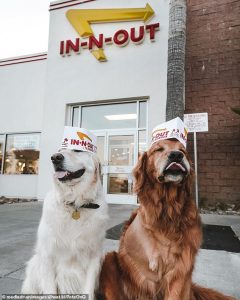 Golden-brown Kiko, eight, and five-year-old Watson, from Spokane, Washington, were introduced to each other in June 2015.

‘I taught Watson how to hug,’ she said. ‘He knows many tricks but that’s his favourite. I was teaching Watson to hug when I was in the process of making our bond stronger.’

She said: ‘Their favourite things to eat are dog cookies and apples, and they always do everything together.

‘Sleep, cuddle, swim, eat. The love that these two brothers feel for each other brings so much joy.’

Jennifer was matched with Watson in January 2015 when he was seven weeks old to act as her emotional support dog in to help her with PTSD and social anxiety.

And the trio have formed an ‘extraordinary’ bond with Jennifer currently isolating with her two hounds in lockdown.

In a bid to spread joy, Jennifer set up an Instagram account, @wat.ki, for her pups to show their brotherly bond and to raise awareness for amputee dogs and those with cancer.

And the stunning pictures, taken using the Sony Alpha &R II, have attracted 930,000 followers with Jennifer documenting her dogs in the water, on hikes and cuddled up in bed.

‘I think their popularity is because of the love, connection and compassion they show in every photo or video. But also the lovely places they explore together,’ said Jennifer.

The events photographer said: ‘I met Watson on January 11 2015 when he was seven weeks old. He was meant to be my emotional support dog so it took me a while to find my perfect match.

‘I trained him all by myself, I have PTSD and social anxiety. So bonding with Watson and then Kiko have helped me so much.

‘Watson met Kiko when he was about eight months old. And they became instant friends.

‘It took no effort on my part to have them like each other. Adding Watson to my life has been amazing but having Kiko added to the mix has made it extraordinary.’

She continued: ‘Although I’m no longer close to and in communication with their previous owners, I’ll always be grateful I was able to get Kiko and give him a chance of a better life full of love and adventure.’

She revealed how Watson can be picky when it comes to canine friends but took an instant liking to Kiko.

And Watson is the only dog Kiko tolerates,’ she continued. ‘He wouldn’t let other dogs get near him at first. He was an aggressive dog at first, so I was worried he wouldn’t get along with Watson.’

However despite their adventurous lifestyle, Jennifer is still having to support Kiko through his cancer battle.

She said: ‘Kiko is still battling cancer sadly but he is doing a great job at fighting it.

‘As a family we all dedicated our time to help him get through it all with love. Next month will mark a year since his operation on the 29th.’