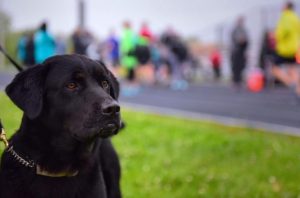 Interacting with a therapy dog for a couple of minutes may help lower stress in physicians and nurses working in emergency departments, say researchers. A therapy dog is a dog that is trained to provide affection, comfort and support to people in hospitals, retirement homes, nursing homes, schools, libraries or disaster areas.

“Many healthcare workers and laypersons believe that dog-assisted support can improve emotional well-being in the healthcare setting, but little hard data exist to scientifically evaluate this belief, especially in emergency care,” said lead author Jeffrey A Kline from the Indiana University in the US. In the 122-participant study, published in the journal Academic Emergency Medicine, emergency providers randomised to a five-minute interaction with a therapy dog and handler.

The research found that emergency providers had a significant reduction in self-reported anxiety using a visual analogue scale compared with patients randomised to colouring mandalas for five minutes with coloured pencils. Also, at the end of the shift, emergency providers had lower salivary cortisol (a stress hormone) with either colouring or therapy dog interactions compared with controls.

“We provide novel data to suggest that emergency care providers enjoyed seeing a dog on shift, and received a small benefit in stress reduction after the interaction. We still do not know the extent to which the benefit was from the dog, the handler, or the combination of the two,” Kline added.