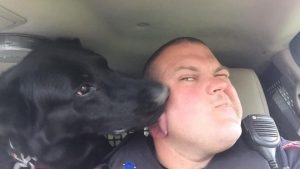 Brimfield Police lost a member of the force last Saturday.

K-9 Havoc was 12 years old when he died. Knarr said Havoc’s hips gave out and he had some other complications, so he had to be put down.

Havoc began working as a K-9 for the Brimfield Police Department in 2009 and served for about nine years, said his handler, Sgt. David Knarr. Havoc retired in September 2018.

“Havoc was a phenomenal partner. He idolized me. If he wasn’t looking at me, he was right near me. He just locked on to me right from the start,” Knarr said of Havoc.

Knarr said he got Havoc as a six-week-old puppy from Whited K-9 services in Brimfield and began training him immediately. Schmidt’s of Macedonia worked with Knarr to train the dog.

Knarr said Havoc barked a lot, which could scare people who didn’t know him. But Havoc was also a licensed therapy dog, something Knarr said was rare because hospitals often won’t certify dogs who have had aggression training. Havoc would go to Field Schools on test days to help the students and staff de-stress, Knarr said.

“He lowered the temp of the school, when people were agitated he would walk through the building and calm people down,” Knarr said.

At the time, having a K-9 with the school resource officer was not common, Knarr said.

When it came time for Havoc to retire, Knarr said, he bought Havoc for a dollar and Havoc came to live at his family’s home. But for the rest of his life, Havoc wanted to go back to work, Knarr said.

“The day we retired him, he sat by my door for two hours wanting to go to work with me,” Knarr said.

Havoc was replaced by Brimfield K-9 Recon the same day Havoc retired. Knarr also handles Recon and handled K-9 Ace beginning in 2003 prior to having Havoc.