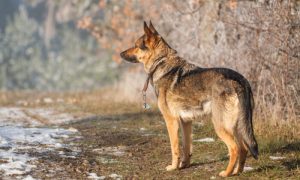 On April 27, 2020, a 3-year-old girl went missing from her home and wandered into the snowy woods. A fervent search commenced, and a scent-tracing K-9 police dog became the hero of the hour.

Constable Dan Berube and his police service dog, Jynx, were called to Musquodoboit Harbour in Nova Scotia, Canada, to help search for a missing 3-year-old girl. Halifax Regional Fire and Emergency also sent a drone team to the woods to aid the search.

As soon as first responders on the ground were instructed to hang back, Berube and Jynx’s keen senses got to work. “If there’s a lot of human scent in there, it gets harder for us to find the actual person we’re looking for,” Berube explained to CBC News.

Berube had learned during training that lost young children often head downhill, but this missing 3-year-old’s mother had forewarned the search team that her daughter, who remains anonymous, was “a climber.” Berube, a parent himself, listened to the mother’s advice.

“I have children of my own and I know my children best,” the constable said, “and I figured mom knows her daughter best as well.”

Berube described his and Jynx’s initial search as trying to find a needle in a haystack. As the woodland became increasingly dense, the constable grew uncertain. “In my mind it was so thick and so hard to navigate through that I was ready to pretty much determine that no human would go through there,” he said.

Jynx was quick to identify the little girl’s scent but only in the direction of the missing child’s home, indicating that the dog may simply have been smelling the scent of fellow officers who were previously there in the woods searching for the girl. After Berube decided to clear the hilltop, the dog’s direction changed.

Jynx picked up another smell, and Berube recalled hearing a diminutive voice after which he called the RCMP officer to rush. “I thrashed harder and my dog led me to where she was,” the constable recalled, “in the middle of absolutely nowhere, a whole bunch of pine brush around her and she was just standing there.”

The first thing that Berube heard the little girl say was “Doggy,” hailing her four-legged hero. The constable wrapped her in his jacket and hugged her, noting that she was wearing mismatched boots, was cold and wet but not fearful, and was simply asking for her parents.

After locating her, an RCMP officer carried the little girl back to her parents.

“I can’t imagine one of my children not being home for dinner, not home at night,” Berube reflected, speaking to CBC News. “I wasn’t going to let this one slide.”

Jynx, the amazing K-9 that sniffed out the missing little girl, was given a treat for his sterling efforts.