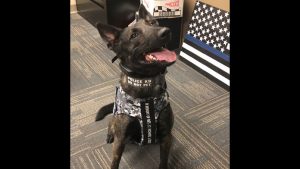 The borough’s top canine cop has received a grant.

The money comes from Vested Interest in K9s, Inc. a nationwide charity located in East Taunton, MA, whose mission is to provide bullet and stab protective vests and other assistance to dogs of law enforcement and related agencies throughout the United States.

The organization presents their “Healthcare for K9 Heroes” medical insurance program for 2020 which covers annual policy premiums. Since 2016, the charity has donated over $125,000 towards medical reimbursement programs for self-funded K9 units.

Loki was chosen as a 2020 recipient of the “Healthcare for K9 Heroes” grant. Those departments that receive the award use them to support the financial burden of raising funds to support their K9 unit, who have no more than three K9s, and who have previously been awarded a vest through Vested Interest in K9s, Inc.

Law enforcement dogs ages 2 through 7 are eligible. The annual medical reimbursement insurance policy, administered by Trupanion, will cover illnesses, injuries – including those sustained in the line of duty – diagnostic testing and therapies.

The plan allows the freedom to use any licensed veterinarian, specialty center, or emergency hospital in the United States.

Trupanion offers injury and illnesses coverage for working and service dogs – both on and off duty.

In addition to the healthcare reimbursement program, Vested Interest in K9s, Inc. has provided over 3,917 law enforcement dogs with U.S. made, custom-fitted, NIJ certified bullet and stab-protective vests in 50 states, at a value of over $6.9 million dollars.