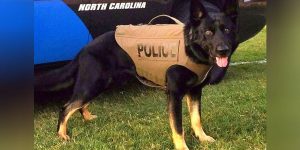 A K-9 officer with the City of Lenoir Police Department passed away Tuesday after a battle with cancer.

Police K-9 Axel served the department and City for six years, “providing his handler and family six years of love and companionship.”

The department put out a release about Axel’s passing and years of service on Wednesday. You can read that below:

Axel was born June 30, 2013, in the Czech Republic and was purchased by the City of Lenoir Police Department in August 2014. Sgt. Zachery Poythress trained Axel from start to finish while the sergeant earned certification as a Comprehensive Police Service Dog Trainer and Police Service Dog Team Instructor. Axel certified in October 2014 and became the City’s first Police K9 to be dual certified by two separate associations.

In early November this year, Sgt. Poythress received news that Axel was diagnosed with advanced hemangiosarcoma. Axel did not suffer, but the news was hard on the Poythress family.

“Some people will say that it is just a dog, but they overlook the impact these dogs have on people’s lives,” Sgt. Poythress said. “Axel has proven his dedication and love for the people of the Police Department and the city. I would like to express my deepest gratitude for the support of Lenoir Police Department command staff, everyone at the Police Department, and for all the messages and support we have received during this time.”

Axel started working for the Police Department in October 2014. During his six years of service, he completed more than 1,000 utilizations including narcotics sniffs, tracks, building searches, article searches, area searches, perimeter security, demonstrations, and training. He was responsible for the seizure of $943,243 worth of narcotics and $82,242 of money, which included the largest seizure of LSD in the history of the department and the largest or second largest seizure of heroin/fentanyl.

Sgt. Poythress said that in addition to all of Axel’s documented achievements, there is one success that is impossible to measure – the number of times Axel saved lives.

“We could fill up pages with his stats, but the stats we will never know are the countless times he saved my life, another officer’s life, or a citizen’s life by doing his job or by nothing more than his presence,” Sgt. Poythress said. “It will never be known the amount of times someone’s mind was changed or a situation was deescalated just by Axel being there.”

The City of Lenoir extends sympathies and condolences to Sgt. Poythress, his family, and the Police Department on the loss of Axel. He will be missed. The City also thanks Dr. Rebecca Whisnant at Caldwell Animal Hospital for treating Axel these past two months.