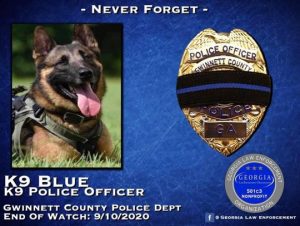 Officers from several law enforcement agencies helped escort the body of a Gwinnett County Police SWAT K9 killed in the line of duty.

K9 Blue, the department’s first full-time SWAT K9, died Thursday when he was shot during gunfire between police and a suspect. Blue tracked down the suspect in the woods before police said the suspect fired at officers. The suspect was also shot and killed.

Friday afternoon a long line of police cars and motorcycles escorted Blue’s body to his final resting place at a pet cemetery.

“When you have a K9 partner, that is a special relationship. These dogs are relied on as a work partner but it’s hard, it’s impossible to not get attached,” said Lt. Jason Teague, the assistant SWAT commander. “He paid the ultimate price, he sacrificed himself to save those SWAT officers, that’s next level.”

Five-year-old Blue had been with the Gwinnett County Police Department for a little more than a year after they conducted a nationwide search. He went through years of extra training to be a SWAT K9. He’s described as very sociable and was selected for his demeanor.

“His key attribute was the ability to work in a team environment under control by just about anybody on the team,” said Teague.

The SWAT team will miss their teammate, but Teague said they learned a lot from working with Blue and look forward to continuing to have SWAT K9s.

A memorial service is planned for Blue next week. Until then, an officer will remain with his body around the clock.

Donations in Blue’s name can be made to the Georgia Police K9 Foundation, which raises money to buy protective equipment for police dogs.