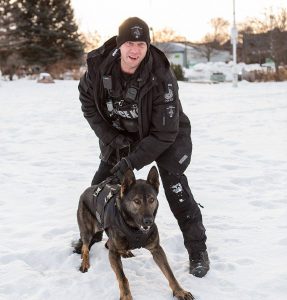 A track into a swamp by Peterborough Police Service dog Isaac resulted in officers locating a suspect following a residential break-in in Cavan Monaghan Township on Wednesday night.

According to the Peterborough Police Service, around 11:10 p.m. a neighbour called police to report suspicious activity at a home on Larmer Line. Police allege suspects broke into a large garage at the home and stole a Honda dirt bike, dirt bike helmets and a television in a box.

Police say the suspects fled into a wooded area nearby. Officers and the K9 unit were dispatched to the scene.

Police say the man was arrested and found in possession of several break-in tools, including bolt cutters, a flashlight and a hammer.

The property stolen during the incident was located at the scene and recovered, police said.

Munden Cody Smith, 28, of Peel Street, Barrie, was charged with break and enter, possession of break-in instruments, trespassing at night and possession of property obtained by crime over $5,000.

He was held in custody and is scheduled to appear in court later Thursday, police said.