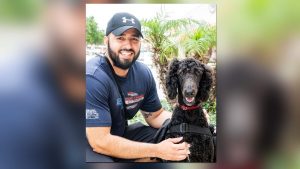 A Ponte Vedra Army veteran who recently graduated from the K9s For Warriors training program with his new service dog, Chris, is looking forward to taking his son to a theme park.

Gabriel P., who suffers from post-traumatic stress disorder from his military service, said he hasn’t been able to go to a theme park since moving to Florida because of his fear of crowds and public places.

He said that’s why he applied to K9s For Warriors.

Amid the ongoing COVID-19 pandemic, the nonprofit’s training program has been amended to comply with CDC guidelines, implementing new sanitizing and PPE protocols for all staff and warriors.

Along with the other members of their class, Gabriel and Chris trained in public every day wearing PPE, received instruction on matters of service dog access, dog health care and more, and established a bond that would facilitate Gabriel’s healing from military-related trauma, the charity explained.

“The rate of veteran suicide in our country is unacceptable,” said Rory Diamond, K9s For Warriors CEO. “These are the people who volunteered their lives so that Americans can enjoy their everyday independence. But PTSD steals their independence, and worst of all, suicide steals their lives. K9s For Warriors is here to give both back to them through a new, loyal battle buddy – a service dog.”

K9s For Warriors is a national nonprofit that procures eligible shelter dogs and trains them to be service dogs to mitigate symptoms of PTSD, Traumatic Brain Injury, and/or Military Sexual Trauma for service members and veterans. It operates from two facilities in North Florida that procure and train the canines, pair them with an incoming veteran, then train the veteran and canine pair together. After three weeks with his or her new service dog, the veteran has learned how to reintegrate into society and, most importantly, reduce the potential for suicide.