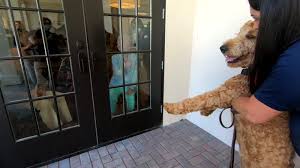 There’s nothing like some quality time with your favorite furry friend. Nobody knows that better than the folks at K9 For Warriors, an organization dedicated to training shelter dogs to become service animals for veterans.

Some of those veterans and several K9 trainers made their way to the Starling Senior Living Community in Nocatee on Tuesday. They were able to share some puppy love with the residents through window visits, while the residents remained in the safety of their own rooms.

“Because of all the isolation, our residents have had a hard time doing what they normally do, and a lot of that was pet therapy,” said Isabelle Miranda, executive director at Starling. “We’ve definitely had to think outside of the box when it comes to finding ways to spend our time in a safe way.”

Greg Wells, manager of programs for K9s For Warriors, said the pandemic has been hard on everyone.

“On us, on our families, on the residents here,” Wells said. “The whole idea to me is to spread a little cheer. We need to train the dogs in a public environment.”

So while the residents got a little “Doggie in the Window” time, the pups also got some needed training.

“It’s a lot of joy, just to know how much the elderly mean to people,” said an emotional Deidre Strag, a K9s For Warriors trainer. “They’re not with their family, and that’s something this generation in the nursing home, they’ve poured into us.”

Miranda said the visit was meaningful for the residents.

“This means the world to us. It’s all love. These animals represent love,” Miranda said. “That’s what everyone needs.”

Starling Senior Living is now back open for limited visitation. Staff said it’s been “emotional, but beautiful” to watch families reconnect after the months-long quarantine.