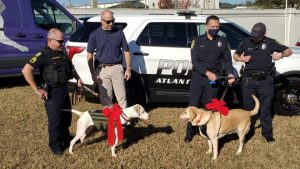 Three Beaches police departments got some bark under their Christmas trees this week.

But their new four-legged gifts won’t help “collar” criminals as much as help officers with their increasingly stressful jobs.

Jamie, Duke and C4 are called station dogs, donated by K9s For Warriors to the Jacksonville Beach, Neptune and Atlantic Beach police departments, respectively, as canine therapy for officers and staff as well as victims of crime.

It’s a job the trio are comfortable with, having been service dogs for returning veterans prior to their new assignments, K9s for Warriors CEO Rory Diamond said.

“Every time a police officer comes back from patrol, they are loving the dog,” said Diamond, also the Jacksonville City Councilman for the Beaches district.

“Every victim who is there, every witness who is there, they get loved on by the dog and feel better,” he said. “… It’s proven to lower stress; it’s proven to keep our veterans alive. We have a huge problem of first-responder suicide.”

As Jamie, Jacksonville Beach’s police service dog, checked out the other two at a Tuesday donation ceremony, Cmdr. Eric Shaughnessy said having the animal at the station will be the right stress relief. Their arrival is a reminder of when one of the department’s own, Cpl. Andy Lavender, took his life 18 months ago, Shaughnessy said.

“We think about Andy all the time, and hopefully if someone is feeling that way in the future, Jamie will be there for them,” Shaughnessy said. “We are hoping those folks can bond with the dog, and maybe after a particularly stressful incident or something they see, they will know the dog is at the station waiting for them.”

Ponte Vedra-based nonprofit K9s for Warriors works to end military veteran suicide by providing service dogs to those returning soldiers suffering from post-traumatic stress, traumatic brain injuries or military sexual trauma. But the three dogs it gave to the police departments will be there to support those community’s first responders as well as co-workers and even crime victims, Diamond said.

“Our police officers are under attack, so we want to do our part to keep them alive,” he said. “They have actually done tests on this and if you pet a dog, your blood pressure goes down.” Gathering at the Wingate Football Fields in Jacksonville Beach for the donation, Diamond said the dogs have been retired from K9s for Warriors after helping disabled military veterans. He designated them for the Beaches police departments after Lavender’s suicide, saying his group had to “be part of the solution and we wanted to keep our police officers alive” by lowering stress and making them happy.

Wearing big red bows on a city football field, the dogs joined the officers in each department who have already been caring for them, integrating the animals into living in the respective stations.

Like K9s for Warriors dogs help military veterans, the station dogs will work on police officer wellness, spending time playing in the station or just going for a walk. And since police officers, like veterans, face similar issues, a service dog in the station can help reduce officer turnover and attrition and other emotional distress. “We have found that he has already blended quite well with our family at the station,” Neptune Beach Cmdr. Gary Snyder said as Duke, a black Labrador, lay at his feet. “We look forward to interjecting him into the community a little bit. He’s got an automatic calming effect for our staff and he is truly already an asset to our agency.”

The dogs are not there to be a pet, but to help officers “de-stress a little bit” and seek some therapy if they need it, Atlantic Beach Chief Victor Gualillo said. C4 will also help their dispatchers who face unique emotional issues, the chief said.

“A lot of times, they are in the midst of a high-stress incident with someone on the other end of the phone who is screaming for help,” he said. “… Having C4 there before the officers can come back and tell them how it turned out can give them a way to reach out and touch something that’s caring and loving.”

The dogs were also welcomed by the mayors of some of the Beaches communities.

“We have dogs now who are bringing happiness and comfort to officers, and what a great thing that is for each of these departments,” said Neptune Beach Mayor Elaine Brown said. “They need it, and it’s just such a good feeling to have Duke running around over there going from office to office and bringing comfort.”

The dogs will also be part of each department’s community policing program, going with officers on visits to schools and other organizations.

“Nothing breaks down a barrier like a dog,” Diamond said.