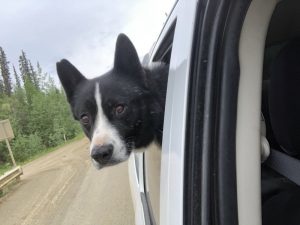 Firefighters continue to make good progress to suppress the Isom Creek Fire (#187) aided by relatively cool temperatures, high humidity, and light winds. Crews improved the north and western perimeters. They continue to assess and implement protection measures for Native allotments along the Yukon River. Mop-up work is ongoing to hold and reinforce the firelines. Spread rates are slow, giving firefighters the opportunity to advance containment efforts the east side of the fire. Two crews are building line south from the Yukon River and two crews are working northward on the east side of the fire. Pioneer Peak Hotshots (State of Alaska Type 1 crew) are working with the North Stars (Bureau of Land Management Alaska Fire Service Type 2 training crew). Winema Hotshots (crew from USDA Forest Service, Oregon) are working with White Mountain (Division of Forestry Type 2 handcrew). Aircraft continue to support ground crews, slowing fire spread. Rio, a Karelian bear dog, hangs his head out of the window to catch a scent while on patrol for bears Monday, June 16, 2020, near the Isom Creek Fire (#187). The dogs and their handler Nils Pedersen of the Wind River Bear Institute were requested by fire managers to keep firefighters safe while in camp and on the fireline. The intent is reducing human-caused bear mortality and human-wildlife conflict. Terry Solomon/Alaska Interagency Incident Management Team.

Several crews are spiked-out, camping near their assigned work sites on the south and east sides of the fire. While at these remote camps, firefighter duties include securing food and garbage to keep the area free of bears. This week the Alaska Interagency Incident Management Team is deploying Karelian bear dogs and their handlers to aid firefighters with this task. These wildlife service dogs are trained to reduce human-wildlife conflicts, keeping crews and supplies safe, and bears wild.

The Dalton Highway remains open to travel, with traffic control as needed for smoke conditions or in support of firefighting efforts. Drivers need to use extreme caution between mileposts 34-62 by driving slowly with headlights on. Be prepared for low visibility, firefighting personnel and equipment along the roadway. Do not stop on the highway. Please use turnouts outside of mileposts 34-62.