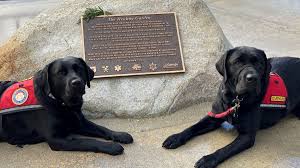 The next time you’re called for jury duty you might be greeted by two black Labrador retrievers, the newest employees working in the Ventura courthouse.

Sibling service dogs Star and Trakr  have been hired as a special type of victim advocate in the Ventura County District Attorney’s Office. During certain trials, they’ll be  sitting underneath the witness box and providing comfort for crime victims and witnesses as they testify, said Supervising Senior Deputy District Attorney Rachelle Dean.  “They can be used in any case where you may have a victim that has gone through a traumatic event… You may also have a child or adult with a disability where they’d do better having the support of an animal,” Dean said.

Dean is Star’s caretaker and started the courthouse facility dog program. Her job as a prosecutor entails overseeing court services so her position and love of dogs made her the right person to start it.

Each dog was $10,000 and funding came from the victims services budget for the district attorney’s office. A federal grant has been used by the agency for more than 20 years and pays for 70% of the victim advocates in the office, said Chief Deputy District Attorney Mike Jump.

Jump is the director of victim and community services, and said the grant is about $1.1 million.

“With annual increases in the grant over the last five years we decided that it was time to bring on the puppies,” Jump said. The $10,000 for each dog covered training for the handlers and equipment. From here on out the grant will cover food, toys and vet bills, Jump said.

In addition to testifying, the dogs can be present at sentencing hearings, preliminary hearings, witness preparation and courtroom tours, Dean said.

In November, Star and Trakr were at the Healing Garden in Thousand Oaks on the anniversary of the Borderline shooting. Star also recently went to support local victims of the Route 91 mass shooting in Vegas while they shared their stories as part of an event marking the third anniversary of the shooting, Dean said. Star was there snuggling with them as they shared, she said.

Victim advocates from the local district attorney’s office got to see dogs like Star and Trakr in action when they volunteered to go to the scene in Vegas to provide help to the numerous victims.

“There were people so in shock and unable to talk it gave them the ability to find their voice again. It’s very moving to see the work these dogs can do,” Dean said.

The COVID-19 pandemic has significantly slowed down the number of trials happening in Ventura County Superior Court. There’s been about a half-dozen since the court reopened in June, Dean said.

Given the pandemic’s restrictions, most of the people benefiting from Star and Trakr’s comfort these days have been the attorneys and court staff coming into the courthouse each day.

“They go to work everyday. They may do meet and greets with court staff and they’ve provided a lot of secondary support in the courthouse with COVID and the shutdowns and everything else going on,” Dean said.

Star worked her first trial in November. It was over a violation of a domestic violence restraining order. A 9-year-old and 14-year-old were called to testify, Dean said. Star first came to the district attorney’s office in June, and Trakr signed on in October. Star was supposed to start at the courthouse in March but the pandemic delayed that, Dean said. The dogs came from New Mexico-based Assistance Dogs of the West, a nonprofit that trains dogs bred for service, Dean said. The nearly 3-year-old litter mates have each gone through two years of training to become certified service dogs, Dean said.

They are trained for 18 months learning different cues then go through another six months of formalized training. Those six months are partly to ascertain whether the dog is better suited for an individual or if they’re comfortable meeting lots of people, Dean said.

Once the dog gets to Ventura they spend another 90 days getting the lay of the land at the courthouse, Dean said. Star has already started working and Trakr will start in January, Dean said.

Dean said it took her about a dozen trips to New Mexico to find the right dog for her. The dog chooses their caretaker, and when the two met there was an instant bond, she said.

“I didn’t know what they meant by ‘the dog chooses you’ until it happened,” Dean said.