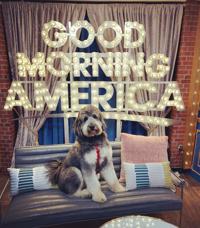 Two-year-old bernedoodle Finnigan had an opportunity to step into the spotlight last week when he was invited onto Good Morning America to be honored as their Pet of the week.

Finnigan brought his owners Teddy Dellas and Meghan Sluzynsky, a Lake County couple, along with him on the journey to New York City where he was recognized for his big heart and work as a therapy dog.

Sluzynsky sent in Finnigan’s application for Pet of the Week back in September after seeing a post on Facebook for the program.

“I saw it when I was eating breakfast. They asked for a quick write-up and a couple photos so I submitted the application,” she said. “Fast forward to Feb. 11 or 12 and I got a phone call from Good Morning America to let me know that he was one of their top five choices and asked if Finnigan was able to come out to New York City the following weekend.”

“It’s pet of the week, not dog of the week, so it came down to the final two where they were going to pick Finnigan or a duck,” Dellas said.

The next day Sluzynsky received a phone call where she learned that Finnigan had been chosen.

Once learning the news, the couple had to record themselves answering some questions and submit over 70 pictures of Finnigan for the segment.

“It actually worked out well because that weekend we were going to the library and nursing home anyways, so I got a bunch of photos of him working and then the following Thursday we hopped in a minivan and drove to New York City,” Sluzynsky said.