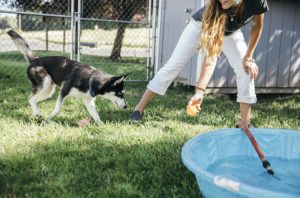 Under the new, three-year contract, which went into effect on March 1, the Washougal shelter will be able to operate as more of a full-service provider when it accepts stray and lost dogs.

Prior to the contract, when a stray dog came into the Washougal shelter, WCGHS staff needed city of Washougal approval to access basic and even emergency veterinary care.

“Everything we did for stray animals had to go through the city,” WCGHS Executive Director Megan Dennis recently told the Post-Record. “(The city) would choose whether or not we could or should provide those services.”

The shelter staff could not provide stray animals with vaccines or transport them to an emergency veterinary clinic without city approval.

The new contract with HSSW changes that arrangement by utilizing the larger Vancouver organization’s veterinary care and financial expertise. WGCHS will continue to shelter stray, lost and abandoned dogs, while HSSW acts as a back-up facility and as the stray sheltering program administrator.

“We have basically become a full-service provider,” Dennis explained. “Instead of the city having control over what care we can provide, we as the experts are able to determine whether an animal needs care.”

Stray dogs coming into the Washougal or Vancouver shelters from Camas-Washougal will now be able to receive needed medical care, such as deworming treatments and vaccines, and can be transported to a veterinarian if necessary.

“It’s upleveling the care of animals in Southwest Washington,” Dennis said, “and will benefit the community.”

“Our animal sheltering services contract will not only provide food, shelter and basic care for lost, abandoned and hurt animals, but also enhanced veterinary care; lost and found redemption services; licensing, and administrative and fee collection services to (Camas-Washougal),” WCGHS and HSSW leaders explained in a recent opinion column about the benefits of the new contract.

Micki Simeone, president of the WCGHS Board of Directors, said people who come to reclaim a lost animal at the Washougal shelter also will reap the benefits of the new contract.

“When citizens came to reclaim their animal, they had to go to the city to make a payment and then come back to us,” Simeone said. “It wasn’t convenient.”

The new agreement with HSSW will cut out that middle step and allow citizens to make a payment at the Washougal shelter when picking up their lost pet.

Simeone said WCGHS leaders have been reevaluating the shelter’s arrangement with the city of Washougal for the past few years.

“With more recent board members, starting in 2013 and more recently in 2015, there has been a whole new mindset of, ‘Hey, you know, this is a great service we’re providing to the community, but the protocols in place are limiting us from providing the best practices.”

WCGHS leaders worked with city of Washougal officials to come up with a solution.

One piece of that solution involved the transfer of the Washougal dog shelter building, which was in need of nearly $80,000 in repairs and upgrades, from the city to the WCGHS.

“Having the building gives us more control to make it the way it needs to be for our animals,” Dennis said. “It also gives us more security. When it was owned by the city, the city could have taken it away from us. Now it’s our building.”

A new long-term lease — five years versus year-to-year — with the Port of Camas-Washougal for the land under the shelter building also gives WCGHS leaders more security about the local humane society’s future.

“Before … we felt we were at risk. Now, we’ve really been able to secure a better future for ourselves,” Dennis said.

The local animal sheltering services cost WCGHS an average of $350 per animal — one of the lowest costs per animal in the Portland-Vancouver metro region, according to Stacey Graham, president of the HSSW.

In the past, Camas and Washougal have paid WCGHS $120 per animal for sheltering services. That meant that donors were footing much of the bill for caring for people’s lost and stray animals.

To help lessen the cost for donors and help pay for the enhanced sheltering services, the contract between WCGHS and HSSW will increase the flat fees charged to the cities of Camas and Washougal.

Even with the increased fees, however, the cost to the cities doesn’t cover the full cost of sheltering and caring for a lost animal, Graham said.

“We’re not recovering (the total costs of stray animal sheltering) from any municipality,” Graham said. “We do have to subsidize with donor funds.”

The shelter leaders say they hope to work with city leaders in Washougal and Camas to help educate them on ways they might help fund the increased sheltering fees.

“Even though we know the price increase is significant, we’re working with the cities to help them get back some of the funds,” Graham said. “We feel that there is a really good way for them to increase their revenue by passing (the costs) along to the pet owners who have to utilize this stray shelter. The people who need it should have to help cover the cost.”

The shelter leaders have encouraged city officials to reconsider lifetime pet licensing fees that are not in line with the annual or bi-annual pet licenses implemented by most other Southwest Washington municipalities.

Pet owners in Camas-Washougal will likely be relieved to know that, under the new sheltering agreement, if their dog does run away and is found by local animal control officers and taken to the WCGHS, local residents will be able to pick their pet up in Washougal and know their animal is receiving best-practices care from trained staff.

“It is a good thing that we were able to keep WCGHS as the primary shelter,” Lisa Feder, HSSW’s vice president and director of shelter operations, said. “We heard a very clear message from citizens (that they wanted to retain a Washougal animal shelter). “The (new contract) has more to do with efficiencies and quality of care. Reclaiming a dog (in Washougal) will be far easier and much more in line with the way normal shelter contracts work.”