Life Is Better With A Animal 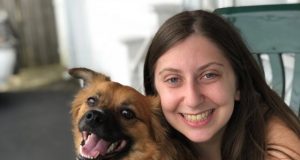 Mental illness is a prevalent struggle in many people’s lives, myself included. To deal with anxiety and depression, I rely on my dog, Maui, to make it better. He’s just like any other dog upon first glance: goofy, loyal, loving, and unapologetically cute. But one thing separates him from your average pet: he’s my emotional support animal.

Emotional support animals – or ESAs – are commonly confused with service animals.  The difference is that while service animals are trained for a job to assist someone with a disability, such as sight loss, and registered under the law, ESAs are not trained nor registered in the US. This has led to a lot of frustration and difficulty for people that need them.

My journey with ESAs started in the summer of 2015 with two guinea pigs, Treecart and Fountain. I had just come back from my first year of university where, following mental health difficulties, I was put on “suicide watch”. I jumped at the chance to have pets of my own. On returning to school, I spoke with my psychiatrist who recommended I take the guinea pigs with me as ESAs and wrote a letter explaining why to the school. I brought them with me before I had been given approval, but while waiting for Disability Support Services to respond, a falling out with a roommate led her to report them. The school informed me that I’d have to “get rid of them” but did not punish me.

The following semester I decided to transfer to a university closer to home. I contacted their Disability Support Services and learned they had an ESA policy, but I was the first student to use it. That semester I piloted the ESA programme.

With my guinea pigs to support me, the semester was much more manageable. With them to wake up and come home to at night, anxiety that previously paralysed me and kept me in bed was overridden by the need to care for my ESAs, and the unconditional love they gave in return.

Toward the end of my second semester at my new school, Fountain had passed away. The boys were much older than I’d thought, and Treecart was starting to show his age. I knew I still needed an ESA so I began to research a successor to the guinea pigs.

Maui – a puppy less than a year old – was abandoned by his family, but also a perfect match for me. Just from pictures and videos, I fell in love. I adopted him from a rescue centre called Goofy Foot Rescue in Tennessee – then had to register him in my town and take him to my own vet. I brought the new paperwork to school from my doctor outlining that I needed an ESA, and he was ready to go in December of 2017.

While Maui doesn’t have service animal training, he has done amazing things for my mental state. He gets me out of bed to feed or play with him. When I cry, he puts a paw on my leg or drops a toy in my lap; he’ll snuggle up to me, and his breathing will keep me calm. He can be too generous with his kisses at times, but I couldn’t ask for a better companion.

You could say that’s just a dog being a dog, but the difference is the owner. I need him just as much as he once needed me. His presence has turned the tide of my battle with anxiety and depression in my favour, but I still fight for happiness every day.

I used to take Maui everywhere, but I tried to be courteous: I went to the supermarket late at night, I would ask people if he was welcome in their home, and if someone was nervous around dogs, he’d stay on the lead. Mostly it was simple, but there were times I’d have to leave him in the car – weather permitting – or he’d have to stay home, and I’d worry without him.

Maui has been a necessary part of my daily routine, just like a service animal. His support may be mental, but it’s treating an illness regardless. In addition to my mental illnesses, I also have hearing loss. While I’ve had problems getting support for both, I’ve had far more trouble pushing for ESA-related accommodations.

One of the most difficult situations people with ESAs face today is getting onto a flight. Even people with service animals can have a difficult time despite laws protecting their presence in public places so, as you might expect, ESAs have it even harder. ESAs are part of a passenger’s well-being, and the law needs to do better to protect their rights. Likewise, it would be great to see UK law recognise ESAs as service animals too.

Some people have ESAs that aren’t dogs or cats, such as guinea pigs or birds. In these cases, the animals are typically confined to carriers when travelling for the safety of the animal, so they will have no interaction with the outside world. My guinea pigs stayed in my home or dorm as opposed to a dog like Maui who has travelled most places with me. As the law in the US stands, a person cannot be denied housing for having an ESA, but because landlords reserve the right to deny housing for other reasons, it becomes difficult to prove denial due to the ESA. In cases like these, better legislation needs to be implemented to accommodate for exotic animal ESAs.

Despite a recent increase in mental health awareness, suicide has been on the rise in the US. If more countries had legislation to defend ESAs’ rights, more people would have the opportunity to benefit from having a companion which could both improve mental health and reduce suicide rates. An increase in the number of ESAs could also increase adoption rates of rescue animals like Maui.

Fountain, Treecart and Maui have helped me overcome so much just being by my side. ESAs can be alternatives or used in combination with medication or therapy to help people deal with their mental illnesses, but more governments need to support this by making these necessary changes. If we can help more people just by letting them love animals, we should let that love heal.