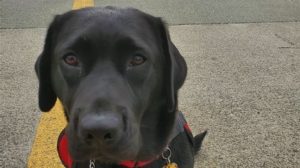 In honor of national service dog month, The Miracle Flights organization helped a boy get his own life-saving canine.

O’Bryan’s seizures were so severe he could not be alone or sleep in a bed by himself, until now.

Miracle Flights flew Owen O’Bryan and his parents nearly 5,000 miles from Alaska to Kansas for free to meet Juno.

Juno is a seizure-alert dog from The Cares Foundation.