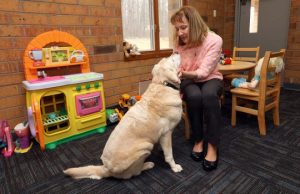 When Detective Lt. Mary Murphy of the Rockland County District Attorney’s Special Victims Unit retires in April after 31 years in law enforcement, her partner will retire, too.

That’s because her partner is a golden Lab named Lily, 10½, who also lives with her.

“It’s a good time for her to retire,” Murphy said. Fighting for justice for vulnerable victims, mostly children, can take an emotional toll on human and canine law enforcement alike.

“Lily couldn’t understand the words,” Murphy said, “but she very much could sense the anxiety. I think she just needs to be a dog now.”

Lily, the New York metropolitan region’s first SVU therapy dog, has been in training or on the job pretty much since she was 8 months old.

“I can’t tell you the amount of children this dog has helped,” Murphy said between pets and pats. Lily’s job is to give victims the support and the strength to recount their story, Murphy said.

But she’s also there to ensure the bad guys face justice. “Our main goal is to protect a child,” Murphy said. “Our secondary goal is holding perpetrators accountable.”