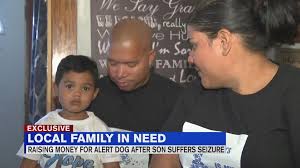 A few months ago, we brought you the story of a Springfield boy who suffered a life-threatening seizure.

His parents are now raising thousands of dollars to get him a sidekick that could be lifesaving, but they’re still a bit short on funds.

“It’s feeling more real that we’re gonna make it,” said Carmen Cumba.Cumba is the mother of four-year-old Carlos, who suffered a serious seizure back in September. In that moment, she thought for sure she might lose him.

After that, his parents decided that a diabetic alert dog could be a lifesaver to detect when his blood sugar is too low.

“I was scared – and I’m still scared – because we’re adding another member to our family, but I feel like it’s going to be a relief,” Cumba explained.

However, Carlos doesn’t have Kassie just yet. She still has about six months worth of training and his parents still have to pay a few thousand more dollars to get her.

Carlos was diagnosed with Type 1 diabetes when he was just two years old and when his blood sugar levels dip too low, it could put Carlos into a diabetic coma.

However, getting a service dog is costing the family $15,000, so they’ve been fundraising for the last few months.

“We’re going to still be doing fundraisers, as much as we can do with the situation in the world right now,” Cumba noted.

Between a GoFundMe page, social media, and local business stepping up to help, the family has raised $8,600 so far, but they need at least $10,000 to bring Kassie home once she’s done with training in May or June.

Cumba will have to finance the last $5,000, but she told Western Mass News it’ll be worth it.

“I just feel like between companionship and also being able to alert us that he’s low is going to help me and help him,” Cumbo said.

In addition, you can donate directly to Carlos’s account on the Diabetic Alert Dogs of America website. Once on the page, When prompted for a ‘Description’ on the next page, enter ‘Carlos Frias Cumba ID # 4707’ and enter your donation amount into the ‘Price per item’ field.

“I’m thankful for the whole world, for everybody that looked at Carlos’s story. Please continue to share. I really appreciate it,” Cumba said.