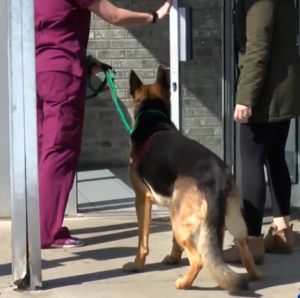 While many of us looking to help keep ourselves healthy, we still need to be looking out for our pets.

Humans can take part in telemedicine by telling the physician what problems they’re facing, but our animals need us to speak for them.

This has spawned a new kind of service.

There is a sense of relief for pet owners in a time of uncertainty and fear.

Animal Kingdom Pet Hospital is one of the local care facilities that has switched to a drive-up service for those coming in with a pet in need.

“Its been different having to come out and get animals for once and doing everything without the owner, but obviously everyone has cell phones now and we are able to communicate that way,” said Heather Stauffer, manager, Animal Kingdom Pet Hospital.

Once the owner arrives and is parked they can then call into to the hospital to let them know they are here, which is then followed by a series of questions.

“They go over health history stuff on the phone, things like that. Then you wait until they call you again and they come get the pet from you,” said Samantha Kennedy, pet owner.

For some pet owners, this way of going to the vet is easier compared to what they’re used to.

“In our case it’s actually better because he does get a little anxious around other people and around other dogs too. It is beneficial to us that he can just chill out until they’re actually ready for him in the car,” said Kennedy.

But as for what services the vets can provide right now;

“We are doing the wellness exams that involve the leptospirosis and rabies vaccinations due to the human contact and potential there. Plus rabies is a law. Laws don’t stop while COVID-19 is going on, so we want to make sure we’re keeping up with that,” said Stauffer.

Non-essential services such as nail clippings are not being done at this time.

The veterinarian went onto explain that there are videos online you can watch to learn how to properly cut your animals nails.

You are encouraged to call your vet for any concerns or questions.