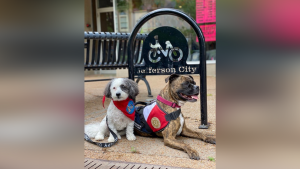 Olive, a therapy dog from Jefferson City, and Sobee, a service dog from Holts Summit, have advanced to the semifinal round of the 2020 American Humane Hero Dog Awards, a nationwide challenge to recognize dogs bettering the lives of those in need.

In a news release, Sobee and Olive’s handlers are asked the public to help by casting a daily vote in each of the Hero Dog Awards seven categories.

“Olive and Sobee need your vote to help shine a light on the needs of comfort while abused/neglected children navigate the judicial system, and PTSD veterans/victims in our nation who need their stories heard and needs met,” said Lisa Bax, Olive’s handler. According to the release, Olive began serving as a courtroom therapy dog for Capital City CASA in 2016. Since 2016 Olive has served over 300 abused and neglected children in the Circuit Court of Cole County’s courtroom.

“Court can be very traumatic for children whose lives have been turned upside down by entering the judicial system at no fault of the child,” said Jennifer Berhorst, a local child welfare professional who works alongside Olive. “Nothing makes it easy for them to face their situation, but Olive has a huge impact in lowering the stress/anxiety for these kids facing adversities.” Just two days before Sobee was scheduled to be euthanized in a Georgia kill shelter, the release said K9’s on the Front Line rescued her for Jason Howe, a man who ended up being Sobee’s handler. Howe is a combat veteran who suffers from PTSD. Howe said Sobee helps him deal with his PTSD. “When suffering from a panic attack Sobee is trained to bring me back to present moment,” said Jason Howe. The winner of each category will be featured on Hallmark Channel USA.